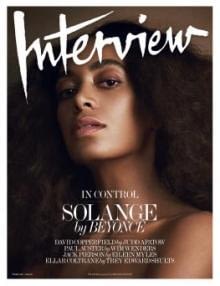 –Beyonce will no longer be interviewed (apparently), but she interviews her sister Solange in the new issue of Interview and it’s everything you could ever hope for. An actual question: “What are some misconceptions about being a strong woman?”

–Brad Pitt and Angelina Jolie have released their first joint statement since she filed for divorce in September, saying “The parents are committed to act as a united front to effectuate recovery and reunification.” Huh?

–Johnny Depp is reportedly continuing to drag his feet on paying his divorce settlement.

-In Madonna‘s new Harper’s Bazaar cover story, she talks about the nightmare of the Trump presidency and reveals that she calls rosé “summer water” (hey, I did it first!).

-TMZ reported that Jamie Foxx was violently attacked at an LA restaurant and he responded by pretending he was … but he wasn’t? Cool story, bro.

–Tom Hiddleston has apologized for that really terrible acceptance speech.

-The Amal Clooney pregnancy rumours are picking up steam.

-This is a great read on Sterling K Brown’s incredible year.

-I really like this take on how The Crazy Ex-Girlfriend renewal offers a preview of where TV might be going. It’s the lowest-rated show ever to be renewed by a major broadcast network, but its deals with CBS and Netflix (as well as its critical acclaim) give it wiggle room.

-So, there’s an actual chance that Deadpool could get a Best Picture Oscar nom. For real.