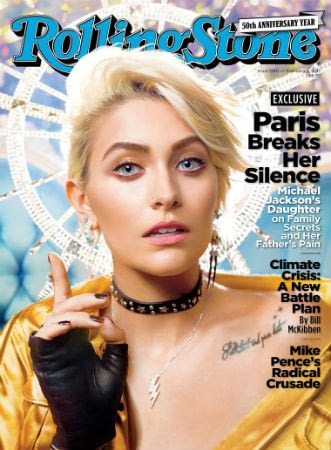 –Paris Jackson gave  her first-ever in-depth interview for the cover of Rolling Stone and she didn’t exactly hold back. She talked about her multiple suicide attempts, her childhood growing up on the Neverland ranch (“We couldn’t just go on the rides whenever we wanted to. We actually had a pretty normal life”) and her belief that her father Michael was murdered.

–Ewan McGregor (a longtime supporter of women’s rights) is refusing to be on Piers Morgan’s show because of his comments on the women’s march. Bless him.

–Todd Fisher teared up talking about his sister Carrie being the face of anti-Trump rebellion.

-The Oscar noms were announced this morning and the biggest shock was Meryl Streep‘s nomination. She beat out the much-more deserving Amy Adams, Annette Benning and Taraji P. Henson. (The internet was particularly pressed about Adams’ snub.)  In other WTF? moments, Mel Gibson somehow scored a Best Director nod over Martin Scorsese (Silence), Garth Davis (Lion), Pablo Larraín (Jackie), Denzel Washington (Fences) and David Mackenzie (Hell or High Water). It wasn’t a complete wash, though. Michael Shannon‘s nod was a nice surprise for Nocturnal Animals (he was one of the few things I liked about that film), O.J.: Made in America was nominated in the doc category, and at least one person of colour was nominated in every major category.

-At least Meryl’s reaction to her Oscar nom was kind of cute.

-Fresh Off The Boat’s Constance Wu wrote about how Casey Affleck’s Oscar win will be a nod to Trump’s and I think I love her.

–Tom Cruise, Joel McHale, Bradley Cooper, Ryan Reynolds and Armie Hammer are all rumoured to be on the shortlist to play Green Lantern and I’m so bored by all of those names.

–Aaron Paul is hinting that Jesse Pinkman might make an appearance in Better Call Saul, which I guess I now have to catch up on? Sigh.

-Oh yeah. I forgot that Laura Prepon is having Ben Foster’s baby.

–Kirsten Dunst is showing off her engagement ring from Jesse Plemons. Landry did good!

-Proof the world isn’t totally shit: The xx scored the highest charting album ever on the Billboard charts. (I’ve been listening to “On Hold” on repeat for months.)

-I rolled my eyes so hard at this clip of Jeremy Renner advising Elizabeth Olsen to approach filmmaking with problem solving that I think I sprained something.

-Huh. The recent lack of TV cancellations this season is starting to create a logjam for broadcast networks as they head into pilot season.

-The Leftovers returns  April 16th. No show in recent memory completed such as successful turnaround from S1 to S2 in my mind so I’m looking forward to it. Here’s the new S3 promo.

-A new Trainspotting trailer has landed.