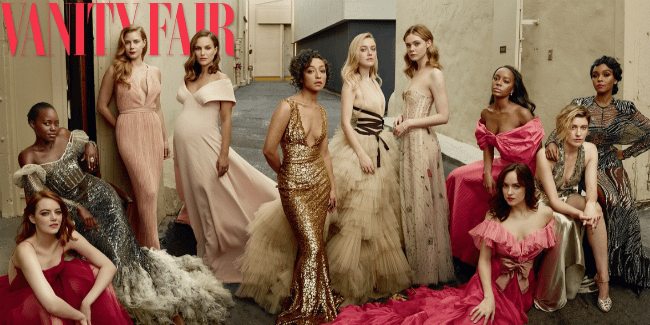 –Vanity Fair’s annual Hollywood cover is here and it’s pretty damn glorious. Everyone looks amazing but Ruth Negga is especially owning it, I think. (Also, they were clearly assuming Amy Adams would be nominated and Birth of a Nation’s Aja Naomi King would be a bigger deal.)

-The solo portraits and videos are great, too.  I love Emma Stone‘s explanation on why she loves Nancy Meyers movies. “How did these women have these kitchens? We don’t know, because we don’t ask, because it looks breezy and like life is wonderful.”

–Shia LaBeouf was arrested after a self-identified Hitler apologist invaded his anti-Trump live stream. Say what you will about Shia, but he controlled himself pretty admirably. Saying “Hitler did nothing wrong” to a Jewish person could have gone wayyyy worse.

–Brad Pitt and Angelina Jolie‘s divorce is the focus of a new investigative documentary, which I’m sure must just *thrill* them.

-This is a great read about Hollywood’s Black List, an annual survey of the “most liked” motion picture screenplays not yet produced.

-Well, this doesn’t bode well: The Flash movie screenplay is reportedly getting a complete rewrite from a new writer.

–Zach Braff is returning to TV. If Donald Faison isn’t joining him I’m just going to pretend it’s not happening.

–Sofia Vergara asks “What’s wrong with being a stereotype?” Uh….

-The more I see from Zendaya, the more I like this kid.

– Kristen Bell and Dax Shepard were on Ellen today and told a cute story about how Dax helped Kristen talk to her celebrity crush Riz Ahmed at the Golden Globes. “I walked up and out of my mouth came ‘I find you very attractive!'”

-In news that should surprise no one,  Nina Dobrev will return in The Vampire Diaries series finale.

-In other news that should surprise no one, the director of Wayne’s World recalls clashing with Mike Myers.

–Roxane Gay continues to be my hero with her clapback game.