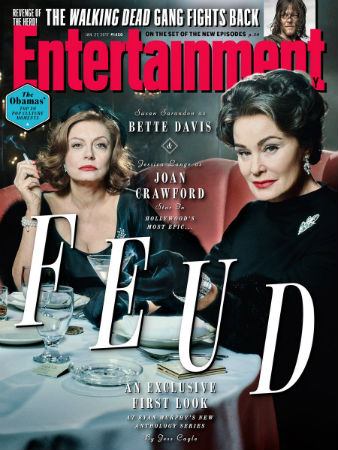 -EW has our first look at Ryan Murphy’s new series starring Susan Sarandon and Jessica Lange as Bette Davis and Joan Crawford in Feud. God, I want this in my eyeballs right now…

-Speaking of Ryan Murphy shows, his next topic for American Crime Story might be Monica Lewinsky. Gimmie!!

-An ET reporter dared ask JLo about collaborating with Drake and she wasn’t having it. (Imagine if she’d actually been asked about *collaborating* with Drake…)

-At last night’s People’s Choice Awards, Blake Lively‘s acceptance speech was all about girl power but she won for a movie about a shark so I was a little confused. At least her outfit was pretty great. AND she brought her sister Robyn from Teen Witch!

-Speaking of PCA speeches that I liked the intent of but didn’t really understand, I *think* Sarah Jessica Parker was talking about appreciating her fandom? Maybe?

-In other PCA news, I was really bummed by Kristen Bell’s outfit. As the Fug Girls remarked, it looked like she was trying to bring back Varsity Blue’s whipped cream bikini.

–Celine Dion is contributing an original song to the Beauty & the Beast soundtrack and suddenly the world doesn’t seem so dark.

–Donald Glover is really owning this coat. Is he trying to audition for the all-female Ocean’s Eleven remake or something?

-This video of the This Is Us cast being told the show is getting renewed for two more seasons is all kinds of cute.

–Alanis Morissette‘s ex-manager admitted in court to embezzling $4.8 million from the singer.

–Chrissy Teigan is here to remind us that the paparazzi is gross.

-I still can’t believe that Anne Hathaway‘s Colossal is getting distribution. It’s one of the weirdest movies I saw last year (in a good way!). Here’s the first promo.

–Chris Evans is such an adorable puppy.

-The new Japandroids album is streaming on CBC and it’s sooooo good!

–Kevin Smith is directing more Supergirl later this year. I like this gig for him (he did a really, really great job on The Flash). As long as he keeps his Black Canary-loving butt away from Arrow…

-Speaking of Supergirl, this is a really good article on why it’s the most progressive show on TV right now. I really should try it again.

-I don’t watch Sherlock but from everything I’ve ever read about Steven Moffat, I’m not surprised to hear him dismiss female fans’ (and the actress in question’s) reaction to a recent episode.

-I’ve never understood how come every year there’s always one sound that becomes ubiquitous in movie trailers? I feel like Cameron Diaz’s character in The Holiday could really shed some light here…

-In much more promising trailer news, the latest promo for Logan continues to impress.