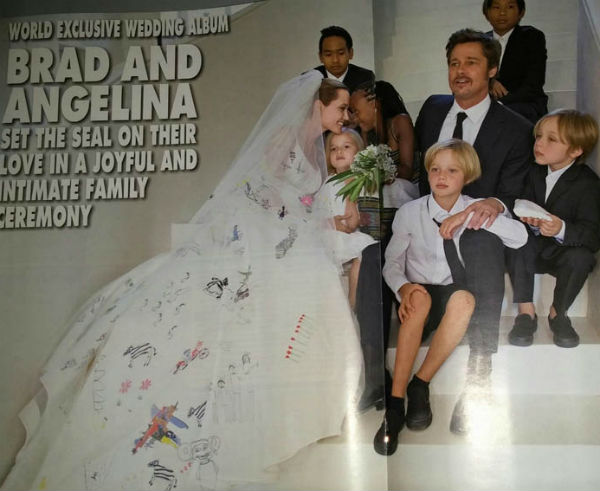 -Ok, it’s been a few hours. Have you processed it yet? Has it sunk in? Brangelina is no more. It’s sad and it sucks for the kids and no one wants to revel in that part of it. So let’s focus on the interesting part: the media strategy. Keep your Kardashians and your Swifts; Angelina Jolie just delivered a bruising reminder that she’s the ultimate image master. This was no conscious uncoupling, no talk of how it’s amicable. She wants to grab her kids and get out, and to do so she’s inviting us all up in her business to make sure that happens. Sources that seem to come from her camp imply she’s nervous about Brad Pitt‘s parenting skills, citing substance abuse and anger issues, and she wants you to know it. According to People the split happened five days ago, but she held on until after all the Emmy coverage died down, waiting until editors on both coasts were at their desks before she dropped the bombshell.

The way she did it, with a pitbull lawyer, a request for joint legal custody but sole *physical* custody, and the implied allegations that burn it all to the ground, makes me doubt all the recent gossip about her drug use. Because if she thought he had anything on her, anything that would jeopardize her sole custody request, would she have gone after him this hard?

So what about the Marion Cotillard of it all? Despite Page Six’s affair report (and numerous blind items over the summer), multiple sources are insisting Pitt’s costar had nothing to do with it. (Though judging by all the ‘serves her right’ slut-shaming I saw today on Twitter from Aniston stans, Jolie would do well to avoid any cheating narrative.)

It sounds like they’d been having issues for a while; People is reporting that the fighting between Jolie and Pitt got so bad this year that he fled to France multiple times to escape it. Us Weekly is reporting an “incident’ last week involving Pitt that prompted Jolie to take action. Based on his weak sauce statement today, he clearly didn’t have the time to strategize that she did.

Another interest angle is how TMZ has positioned themselves this summer. Yes, they were once again the first to break the story, but they are clearly in Jolie’s camp (much like they were in Johnny Depp’s earlier). Their claims that Pitt’s weed consumption was a factor is eye-rolling. (That he’s a notorious pothead couldn’t have come as news to her — unless the rumours that he’s drinking more and maybe graduated to harder stuff are true). Still, at what point are readers going to start seeing TMZ as just a front for narratives constructed by one side’s lawyers? Personally, I’m keeping my eye on Us Weekly for being the one to lead the coverage, as they clearly have a good inside source. The mag got the earliest credible tip that there was trouble in paradise (in a story that weirdly never appeared online, only in print, back in June).

Also, it what might actually be the worst timing in history, Pitt and Cotillard’s new movie trailer just landed, which depicts them falling in love. Did Jolie know that was dropping today? At this point, I’m putting nothing past her. Let us all bow down to the master.

-On the plus side, maybe Jennifer Aniston will finally no longer be cast as some kind of sad “poor her” figure we should pity? She’s certainly having a big meme day.

-In way happier news, Lin-Manuel Miranda is on the new cover of GQ!

-I don’t praise Gwyneth Paltrow often (ever?) but she was interviewed in today’s Lenny and I love her statements about the double-standard in celebrity brand expansion and how no one ever questions all the projects Ashton Kutcher or JJ Abrams take on: “Of course they’re not. They’re not asking Ryan Murphy that, and he has more irons in the fire than anyone. Everybody wants you in the caricature of you if you’re a woman…I was genuinely surprised at the vitriol. I mean, honestly, I sent this nothing [GOOP] issue from my kitchen that had a recipe and two things in it, or maybe it was just a recipe. I don’t even remember. It had nothing in it, and the New York Times wrote maybe a four-page article. It’s unbelievable. The response was totally bananas.”

–Jared Leto just got cast in a new Andy Warhol biopic. You know, the guy who harassed his costars and shit-talked his movie before even seeing it? Yeah, let’s reward that.

-Oh jesus. Friends of Jim Carrey‘s late girlfriend says she married a Scientologist as part of an immigration scam.

-Sweet! FX just renewed Atlanta and Better Things. Donald Glover‘s new show may be getting all the press, but don’t sleep on Pamela Aldon.

-Speaking of under-the-radar TV, have you watched Fleabag yet? I knew I was going to love this show when one character told another she looked tired, and she responded “Yes, I’m successful.” In any case, this interview with the creator and star is delightful.

–Jimmy Fallon followed up his bad Trump interview with a bad Clinton one. This was a good take on the state of election-driven late-night comedy and his place within that.

Jennifer Aniston: Not a Mother, Still a Feminist

Oscars 2015: Best and Worst Dressed on the Red Carpet