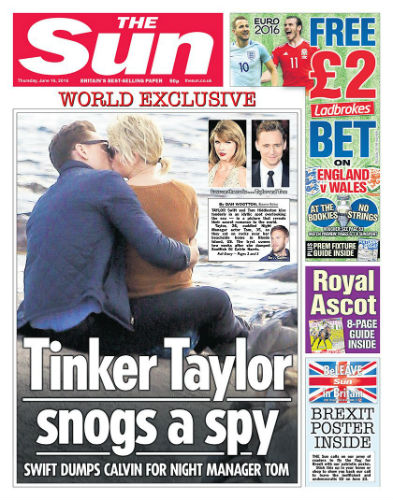 -Forget the kids going back to school. The true end of summer 2016 was marked today by the reported breakup of Taylor Swift and Tom Hiddleston. (That being said, I’m side-eyeing Us Weekly’s source who’s claiming “Tom wanted the relationship to be more public than she was comfortable with.” That just can’t be right.)

-Take it with a giant salt lick ’cause it’s coming from Radar, but they claim Katie Holmes can’t go public with Jamie Foxx until 2017 because it’s part of her divorce agreement.

-The plot thickens! Drake *also* has a shark tattoo.

-Meanwhile, Rihanna had an interesting morning after in Soho.

–Brie Larson has apologized after posting a photo of herself petting a dolphin to Instagram because the internet has no chill.

-I don’t even watch Supernatural but I kind of love that their fandom is responsible for them getting their first EW cover — 12  seasons in.

–Chris Brown is speaking out after his arrest, saying “My character’s been defaced.” Feel like that ship sailed ages ago, buddy.

–Demi Lovato got a really big, really ugly tattoo on her arm and Snapped the whole process.

-Not gonna lie: one of the reasons I’m going to the Nocturnal Animals premiere at TIFF is to see how director Tom Ford dresses his leading lady, Amy Adams. She killed it in Venice.

-A movie that I’m not seeing at TIFF but wish I was is Moonlight, which is getting raves. The film continues amazing run for Brad Pitt’s Plan B, which is likely to have a fourth consecutive best picture nominee.

-Wow, Bridget Jones Baby is actually getting good reviews? Did not see that one coming…

-I’m not sold on Renee Zellweger’s premiere dress, tho.

-Two of my favourite TV critics just put out a book, and this excerpt about Buffy has convinced me to buy it.

-I got 8/10 on this “Name That Hamilton Yo” quiz, and I’m so disappointed in myself.

-This new photo from the Gilmore Girls reboot is super unflattering for Luke. Which kinda makes me love it.

–John Boyega continues to be one of my favourite celebrity tweeters because of adorable crap like this.

–Channing Tatum offered Ellen Degeneres a preview of the new Magic Mike show coming to Vegas. This is going to factor into a lot of my vacation planning next year…

-Also, watching Channing fangirl over meeting Simone Biles is all kinds of swoony.

-Lots of good reaction has been written about Lena Dunham‘s problematic comments last week. Complex’s take on her white privilege is getting the most buzz, but I also kind of liked this one about how she’s a f*ckboy.