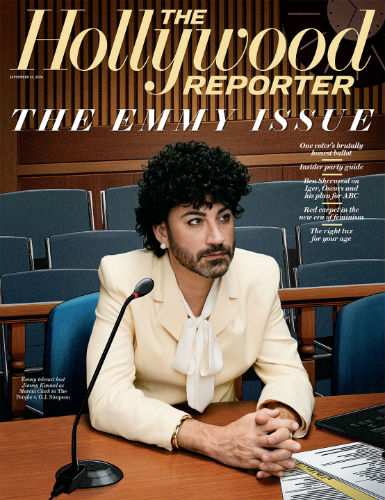 –Jimmy Kimmel poses as as Marcia Clark, Jon Snow and Mr. Robot for THR’s new Emmy cover story. The interview is really good, with him talking about surviving ABC even though “it became a very female network. And suddenly my antics were out of place,” his weird ‘no eating two days a week’ diet, and his foodie travel planning.

–Kristen Bell introduces Pinksourcing, where women are a bargain at the workplace since you only have to pay them 77 cents on the dollar!

-Kim Kardashian took 1,500 selfies a day on her Mexico vacation. I don’t think she knows what the word “vacation” means.

–Britney Spears got bored so she decided to see if she could still do mid-air splits. Hasn’t she heard of Netflix binges?

-Speaking of actresses doing wonderful work on the small screen, I love this article on how Jane The Virgin’s Gina Rodriguez has the trickiest job on TV.

-Meanwhile in TV news, here’s a good look at how each of the 5 networks are trying to win this year. (I just realized that I’m not watching one single returning show on NBC, Fox, ABC or CBS. Weird.) I’m also so curious to see how Supergirl fares on the CW. I think it’ll be its number one show, but their hopes that it’ll pull in half of its CBS audience seem crazy optimistic to me.

–Lance Bass is trying to convince us that Chris Kirkpatrick was the member of ‘N Sync who slept with the most people. Cute.

–Kid Cudi went off on Twitter today, saying (among other things) that Kanye and Drake don’t give a f*ck about him.

-This is a great read on how Gabrielle Union is doing Nate Parker’s job . “The responsibility for serious discussions about rape has instead fallen on another victim.”

-The new Star Trek series for CBS has been delayed until May, while the Good Wife spinoff has been moved up.

-THR’s oral history of South Park includes an interesting bit about Isaac Hayes quitting. Matt Stone says it was because of the Scientology episode, but Hayes’ son seems to imply it was the Scientologists in his father’s life that made the call after he suffered a stroke. “He was in no position to resign under his own knowledge. At the time, everybody around my father was involved in Scientology — his assistants, the core group of people. So someone quit South Park on Isaac Hayes’ behalf. We don’t know who.”

-Netflix, which pretty much doesn’t cancel anything, say it will end Bloodline.

-A French TV host mocked Jonah Hill’s sex life — after he mocked hers first. I think I love her. (He reportedly canceled all of his French press for the upcoming movie after that interview, because of course he did.)