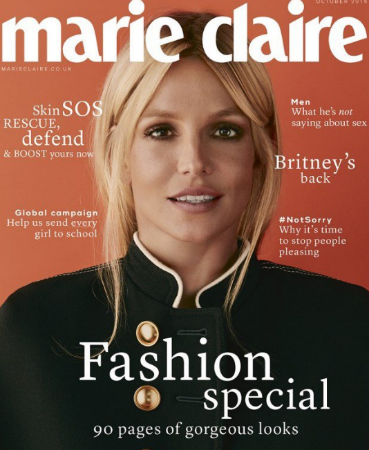 -I don’t love the cover shot Marie Claire UK chose for Britney Spears. It’s…off somehow. It’s almost like she’s cross-eyed or something? Still, the interview excerpt makes it sounds like she’s in a good place, so there’s that.

-So Mindy Kaling’s brother is kind of a dick, huh?

-TV stars guide us through the horrors of Peak TV in this fake PSA.

-Say what you will about Amy Schumer, but she sure knows how to crush hecklers.

–Reese Witherspoon has split ! (From her longtime producing partner, Bruna Papandrea. Sorry, did you think I meant something else?)

-I’m surprised that Tom Hiddleston is still considered to be in the running for Bond.

–Jimmy Fallon getting into a silly string fight with the kids from Stranger Things is just the cutest thing ever.

-Pitch Perfect 3 has  a new director. She previously directed one of the Step Up movies so I already love her.

-I decided not to see Christopher Guest’s new movie Mascots at TIFF because it’s coming to Netflix soon. But the trailer looks super fun.

-I am actually going to the ARQ premiere at TIFF despite the fact that it’ll hit Netflix later this month, mostly because it’s from the Orphan Black creator and it stars an Amell.