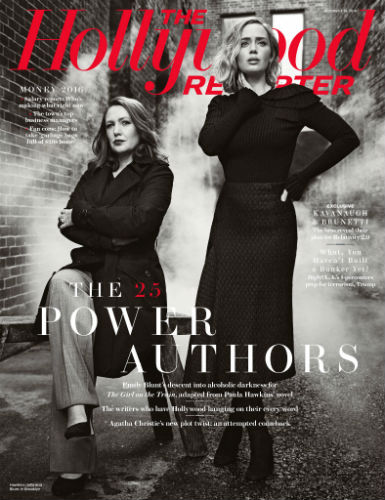 -I wasn’t totally on board when Emily Blunt was first cast as the lead for The Girl on the Train because she’s so different than how I imagined Rachel while reading that book, but the longer her press tour goes on, the more I’m into it. Her THR interview is lit: “Women are held to what a man considers a feminine ideal. You have to be pretty. You have to be ‘likable,’ which is my least favorite bloody word in the industry…Rachel isn’t ‘likable.’ What does that mean? To be witty and pretty and hold it together and be there for the guy? And he can just be a total drip?”

-Meanwhile, Emily and Lin-Manuel Miranda are both set to host upcoming episodes of SNL. Here for it. Also, it looks like Alec Baldwin is playing Trump in the premiere.

–Lin is also making us swoon on the new Variety cover.

–Angelina Jolie‘s camp is denying reports that she plans to move to London after the split.

-Meanwhile, Brad Pitt took a voluntary drug test amid the child abuse investigation, according the Us Weekly (who seems decidedly pro-Pitt this week).

-This is exactly why I still follow Sophia Bush even though I don’t watch any of her TV shows. A Trump and Chad Michael Murray burn in one response? Slay!

–Stephen Colbert, America Ferrera, Joseph Gordon-Levitt, George Takei and other celebs urge you to vote in a new PSA.

-Even more powerful is Jesse Williams’ voting PSA: “This is not about the White House, this is about your house.”

-Well, looks like one good thing came out of The Mindy Project’s disappointing run on Hulu. They did enough episodes to score a syndication deal.

–Mandy Moore says “it’s not weird” for her ex Wilmer Valderrama to date her pal Minka Kelly. Isn’t it, though?

-Speaking of Mandy, her new show This Is Us is the first fall pilot to score a full-season pickup. I really liked the second episode, but am already wary about how many twists they’re throwing at us. Like, is this going to be a thing every episode? ‘Cause nope.

–Kate Hudson belted out an impromptu rendidtion of En Vogue’s ‘Hold On’ on the Tonight Show.

-Critics like the new Netflix series Easy way more than I did (though I really dug the episode with Gugu Mbatha-Raw).

-I feel like James Corden is doing pretty much the same things I’d do if I were suddenly famous. The latest: singing with the Backstreet Boys.

-Speaking of superhero TV, this new movie is a Flash lovefest: co-directed by Jesse L. Martin and Rick Cosnett, with musical arrangements by Carlos Valdes.

-Yass! You’re The Worst has already been renewed for season 4.

-This is sad: the 50-year-old showrunner of NCIS died in his sleep.

-I vowed I wasn’t going to watch the new Arrow trailer when I saw it drop. I made it exactly 47 minutes. I’m weak af.