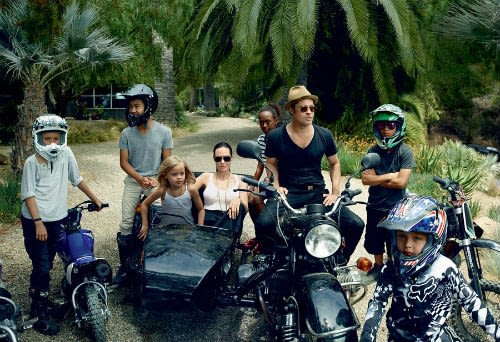 –Angelina Jolie and Brad Pitt just started their By the Sea Oscar campaign by posing with their kids in the new issue of Vogue. I love how this dropped without anyone knowing it was coming. She talks about working with Brad on the new movie (“the worst idea”), planning trips with her kids, and her decision to have pre-cancer surgeries. I love how focused and centred she sounds. I still remember that Esquire interview with her from 2007 that made me convinced she wasn’t going to live past 35. Thrilled I was wrong.

–Jessica Chastain did what we all would do if we were in her shoes; she once pretended to be Bryce Dallas Howard to reap praise.

–Drake covers the new issue of W, in which he talks about his love for Toronto and art. (At one point during his ACL set last weekend he said “This next bit is going prove who’s been fans of mine since the very beginning” and my friend and I both shouted “WHEELCHAIR JIMMY!!” Turns out that wasn’t what he was talking about…)

-Meanwhile, the co-creator of Degrassi is refuting Drake’s claims that the show made him choose between being an actor and being a singer.

–Kate Hudson and Nick Jonas are still icking us out. Neither of them are going to talk about it though, which is more than fine by me.

-Sometimes I think Ellen is just trolling us. Like that time she just got Justin Theroux a life-sized blow up doll who looks like Jennifer Aniston. Like, what? I can feel my mother’s scandalized vibes from across the country.

-His son, Colin Hanks, is currently promoting his new doc on Tower Records. I’m so glad he got it off the ground; I remember him talking about this on a Nerdist podcast five years ago.

-I kind of loved Vanity Fair’s untold story of the Ermahgerd Girl.

–Cate Blanchett thinks wage inequality talk is “boring” and just wants to get on with it and pay women the same as men.

–Emily Blunt is also tired of all the Hollywood sexism talk, but that’s because she says talking about it makes it worse. Um, no.

-I knew I was going to like this article based on the headline alone: “What Is The Point of Katy Perry, Even?” Also, I’m going to refer to her as a nothingburger from now on…

–Ann Coulter took down Raven-Symoné and it kind of made me like her for half a second. What?

-This is such a great profile on Brie Larson. She’s about to explode.