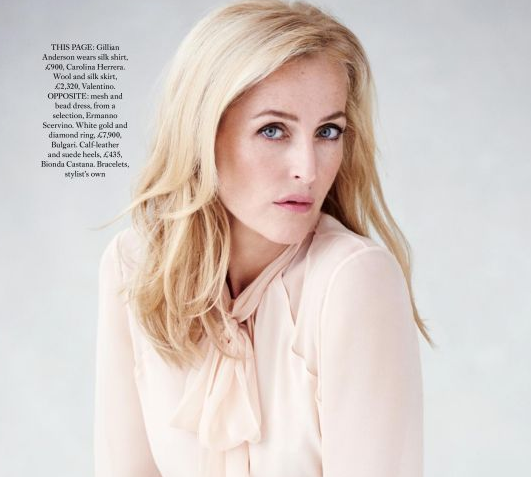 –Gillian Anderson looks lovely in the new Harper’s Bazaar UK, where she talks about feminism, sexual identity and why she went public when she was offered half of David Duchovny‘s salary. “That is a blatant inequality. They’re not going to make The X-Files without me. They’re either going to step up to the plate or they’re not going to make them at all, so I don’t really feel that I put my neck out in any way.”

–Patrick Dempsey sure is saying a lot of words in his People cover story. He talks about reconciling with his wife (“You’ve got to communicate, and stay open and not get lazy. And not give up. And lots of sex!”) and tries to make us believe that killing McDreamy was a joint decision with Shonda Rhimes. Uh huh.

-Lainey’s analysis of how Tom Hiddleston is controlling the breakup narrative is all kinds of fascinating. I seriously didn’t know he had this in him.

-Meanwhile, Idris Elba and Chris Hemsworth interrupted Tom Hiddleston’s acceptance speech for the TV Choice Awards, and it was adorable.

-I’m actually surprised it took Jessica Biel this long to realize she’s a TV girl and not a movie girl.

-Why is Drake‘s dad trying to burst our Drake/Rihanna bubble? WHY?!?!

–Justin Theroux with a beard is making me feel…things.

-Not surprisingly, Brad Pitt is no fan of Donald Trump. “What does he even mean, take our country back?”

-Let’s all just simmer down with that talk of Daniel Craig getting a $150 million James Bond payday, ok?

-Whoa. After all the mud they slung at each other, I was not expecting Halle Berry and Olivier Martinez to quietly call off their divorce.

–Taran Killam did a short about leaving SNL, shot in the style of the NFL show Hard Knocks.

-I really like this interview with Greg Berlanti on superhero TV-making (though I’m bummed they didn’t ask him about his time on Dawson’s Creek. He pushed through Jack’s first kiss with a guy, and the Pacey/Joey romance. If you ever want to take a deep dive into TV production, read The Billion Dollar Kiss.)

-Speaking of Dawson’s Creek, here’s a photo of Joshua Jackson wet and on a surfboard. Because I love you.

–Zayn Malik is developing an NBC series with Dick Wolf inspired by One Direction. So many parts of that sentence confuse me.

-This is a riveting profile of Tom Ford, who opens up about his battle with depression and sobriety. “Death is all I think about. There is not a day or really an hour that goes by that I don’t think about death.”

-I think I’m going to stop reading about the Gilmore Girls revival because it’s getting too spoilery. Like, do we really need the 1st page of the script? (I did appreciate the “you’ve been Goop’d” burn, though).

–Gwyneth Paltrow says she wouldn’t consciously uncouple via Goop again. “It sort of wouldn’t be appropriate now. It is a much bigger business and I’m not sure it would be the right place to do something like that.”

-Why doesn’t anyone seem to like this Chanel dress on Keira Knightley? I’m coveting the shit out of it.

-Meanwhile, Keira would like you to know that she’s not going bald.

–Will Smith meets Love (Keira Knightley) and Death (Helen Mirren) in the first Collateral Beauty. The movie looks intriguing, but it opens against Rogue One.