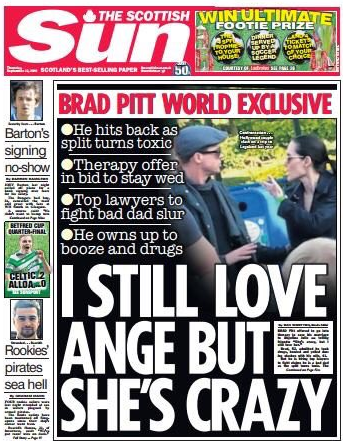 -It took awhile but it looks like Brad Pitt has finally showed up. After TMZ reported that the plane incident involved a fight between him and Angelina Jolie that go so bad, 15-year-old Maddox jumped in between them to defend his mother, Pitt lawyered up with the guy who represented Russell Simmons and Charlie Sheen. He also told his side of the story (through sources) in an exclusive to People, with his camp insisting “He is emphatic that it did not reach the level of physical abuse, that no one was physically harmed. He did not hit his child in the face in any way.” (The “in the face” clarification strikes me as odd.) Also, as Lainey pointed out, the story has undergone a curious edit since it was first posted. Gone are the mentions that “the confrontation was nose to nose” and that he “was not black-out drunk.” Meanwhile, Us Weekly is claiming there is partial video of the plane incident which, if it ever comes out, will be this year’s elevator footage.

-People continues to try to play both sides, saying of her decision: “She’s loved this man for several years, and [divorce] is not something you do impulsively.”

–Kim Kardashian allegedly said she’s considering voting for Trump, which made the internet extra rage-y today. Weirdly though, there’s no sign of that quote in the online version of the interview.  Apparently, it’s in the printed version though.

–Adam Levine and Behati Prinsloo had a baby girl (awww!) and named her Dusty Rose (ewww!).

-We’re day five into the fall TV season and pretty much all new shows (with the exception of Notorious and Pitch) debuted to pretty decent numbers. Returning shows, however, are tanking. This year, if your returning show dips only a little from last year’s numbers, it’s now considered a win.

–Gigi Hadid was picked up and lifted by a “notorious celebrity prankster”, who she took down like the goddamn badass that she is. Now he’s claiming he was taking a moral stand against high fashion. Gross.

-Every supermodel you could name walked the Versace show.

-I like that Ellen Pompeo still seems to be having fun at Grey’s. (Also, this made me miss all the old scenes with her and Christina dancing.)

-One of the Chainsmokers fell off of the stage during a concert, which is super satisfying to watch after reading that terrible Billboard interview with them.

-I am frankly way too hormotional today to deal with Ryan Murphy sharing Cory Monteith’s last words to him before his death.

–Sofia Vergara and Joe Manganiello are dispelling rumours with a romantic Turks and Caicos vacation.

–Chris Evans thinks Captain America might be a virgin. Huh.

-Man, I missed *a lot* of Easter eggs on Mr Robot this season.

-Meanwhile, the show’s creator talked about how bummed he and the cast were when viewers figured out this year’s big twist while still shooting.

-I wasn’t really digging the time-wimey wonkiness the season finale of The Flash introduced, but the trailer for the new season actually looks kinda fun.