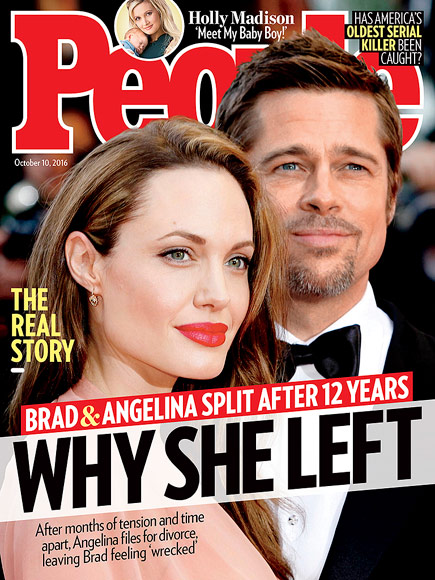 -The big story today was that Brad Pitt is being investigated for child abuse after an alleged meltdown last week on a private plane, as reported by both People and TMZ this morning. This seemed to shed light on the inciting “incident” that both Us Weekly and Lainey referred to when first reporting on the sudden split. According to the reports, an allegedly inebriated Pitt was verbally and physically abusive with one of the kids, and the incident spilled over onto the tarmac, where he reportedly tried leaving in one of the fuel trucks. But then things got a little blurry this afternoon, with a spokesperson for the LAPD insisting to The Hollywood Reporter that there is no active investigation against Pitt. However, he’s not off the hook. People then clarified their story, saying he’s being investigated by the L.A. County Department of Children and Family Services, not the LAPD.  TMZ then added to their story, saying the LAPD does not have an active investigation underway because they transferred the case to the FBI since the alleged incident occurred in the air and then the plane landed in Minnesota, not in their jurisdiction. People and Us Weekly  are now both reporting that the case has been referred to the FBI, with Us Weekly adding that both Pitt and Angelina Jolie spoke  to the DCFS after the jet incident.

-And yet, in spite all of the madness surrounding today’s news there’s still no rebuttal or denial from Pitt’s team hours after this story first broke. According to Lainey, it’s because he’s worried that if he comes out strong against this, there might be more receipts. There’s already talk about how the alleged incident may affect his custody chances.

-Meanwhile, People managed to get their Brangelina cover in under the wire after all (sorry Michael Strahan). According to them, she offered to file the papers together but he begged her to hold off.

-In other news, Marion Cotillard  firmly denied those Brad Pitt affair rumours and announced her pregnancy in one Instagram post.

-It’s probably not a good sign that the latest SNL cast member deleted 2k tweets after getting hired — and then deleted her entire account.

-Speaking of SNL, Margot Robbie will host the season premiere with The Weeknd as musical guest.

-Man, this THR interview with 17 TV showrunners pissed me off. The part where almost all of them turned their noses up at live-tweeting (“a garbage idea perpetuated by garbage people”) is mind-boggling. They all have shows on the big 4 networks — where pretty much the only thing keeping audiences watching broadcast TV live in the age of DVRs, on demand cable and streaming is Twitter. Way to piss off an engaged fanbase that’s giving you loads of free promotion, assholes. Is it because they want everyone to watch their shows with rapt, undivided attention? Cause that’s not how the world works anymore.

-I haven’t watched the Mr Robot finale yet but the headlines this morning were…not great. Critics calling it “a cautionary tale” and “a pile of pretentious bullshit” do not leave me eager to catch up.

–Hillary Clinton appeared on Zach Galifianakis’ Between Two Ferns. Considering all of his questions must have been vetted, it’s impressive he got to ask some of these.

–Michael Strahan is #sorrynotsorry about the way he left Kelly Ripa on Live!

-The new Walking Dead trailer focuses on Ezekiel, ruler of the Kingdom.