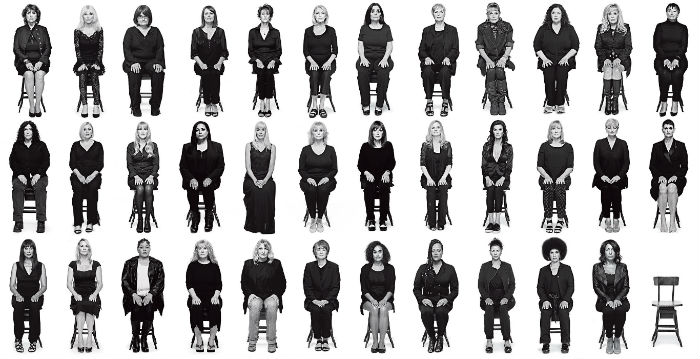 -Of the 46 women who have come forward to accuse Bill Cosby, New York Magazine spoke to 35 of them about the culture that wouldn’t listen. The story is amazing; unfortunately the site was the target of a hack and the story was unavailable for hours today. It’s back up now though and well worth your time.

–Miranda Lambert and Blake Shelton are cute Twittering, so I guess that means there’s no drama then, right?

–The Flash gag reel is super long but very funny. I expect the interwebs to be filled with Grant Gustin dancing gifs in 3..2..1..

-I keep forgetting that Keri Russell is dating her TV husband and then I see a photo of them together and get all giggly again.

-I know everyone is desperate for the Taylor Swift vs Katy Perry narrative to continue, but I’m pretty sure there’s no such thing as shark shade, guys.

-This perfectly captures my complicated feelings about Trainwreck (which I loved, but wanted to love even more).

-Also, don’t ask Amy Schumer about her ties to the Illuminati.

–Shia LaBeouf is quickly going from quirky weird to terrifying weird. How messed up do you have to be to not only get into that situation, but then allow yourself to be filmed in it?

–Jennifer Lopez turned 46 and totally rocked this outfit because the universe is unfair.

-In her Complex cover story, Khloe Kardashian explains why it’s totally cool that her 17-year-old sister is dating (and maybe engaged to) 25-year-old Tyga. “Kylie is not a normal 17-year-old,” seeming to not understand that’s one of the reasons everyone’s freaked by it.

–Bobby Brown issued a statement on Bobby Kristina’s death: “Our loss is unimaginable.” Not surprisingly, her death is being investigated.

–Tilda Swinton may play her Doctor Strange character as a man because there is no end to her awesome.

-In other superhero movie news, Stan Lee wants everyone to chill about Michael B. Jordan playing the Human Torch in Fantastic Four.

-I could give zero f**ks about another Spider-Man movie, but good on Freaks and Geeks alum John Francis Daley for landing the writing gig.

-God, this article about the 10 best episodes of Angel makes me want to watch it all again. Stop ruining my life, quality TV!

-I love Mongrel and think they do great work bringing awesome films to Canadian theatres, but the totally deserved getting called out for this.

-As annoying as Jesse Eisenberg can be IRL, I’m still down to watch him and Kristen Stewart in American Ultra. The trailers just keep getting better.