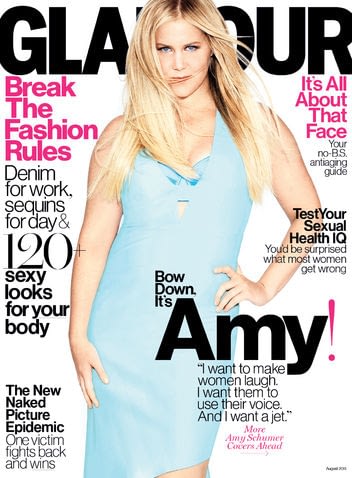 -Not only does Amy Schumer look stunning on the new cover of Glamour, the accompanying interview is perfection. She talks about becoming the new poster child for feminism, setting boundaries with male comics, and demanding orgasms.

–Lainey’s latest blind is very obvious, and very sad. It reminds me of the (seemingly less serious) Jon Hamm situation; he couldn’t publicly confront his demons or seek help until completing press for his career-making project. But surely, a crappy looking movie isn’t worth it?

-This interview with the publicist who managed the Affleck/Lopez and Simpson/Lachey splits offers some great insight into the timing of Affleck/Garner‘s announcement, John Mayer‘s grabby hands for the spotlight, and the increasing popularity of celebs circumventing PR agencies and breaking their own news on social media.

-Also, here’s a roundup of all the rumoured people and reasons the tabloids are citing for Ben and Jen’s split. How odd that the latest EW cover doesn’t warrant a mention…

–Leonardo DiCaprio was in Nunavut recently and when locals tried to take pics he was having none of it.

-A teenager trespassed on the Orange Is The New Black set and took some awesome photos, so the show responded in kind.

-Speaking of OITNB, actress Laura Prepon gave an jargon-laden interview to a Scientology magazine. (I may have squealed a little bit when she actually started talking about thetans…)

-Despite the 2005 testimony that surfaced yesterday in which Bill Cosby admitted to drugging women, Whoopi Goldberg still continues to defend him on The View, saying “The ’80s, they weren’t fun for everybody, clearly” and “I don’t like snap judgement.”

-It’s been a *crazy* few weeks so I missed a lot of gossip, but I don’t know how I managed to completely avoid Jeremy Renner’s ridiculous Playboy interview. God bless the Hollywood Prospectus guys for not letting it completely escape my radar!

-There was way, way too much Bieber ass on my Twitter timeline today. Like, wayyyyy too much.

-This behind-the-scenes account of how everyone on the Back to the Future set knew that Eric Stoltz was getting fired except the actor himself reads like my most paranoid nightmares.

-I’m so down with Rachel McAdams gettin’ herself some Marvel money. She and Colin Farrell are the only things making True Detective almost tolerable (which breaks my Taylor Kitsch-loving heart to say, but our boy is out of his depth. He hasn’t reached Vince Vaughn-levels of floundering yet, but he’s close.)

-A Modern Family writer just obliterated Donald Trump on Twitter and all is right with the world.

-Amazon and Netflix have both passed on Hannibal, which isn’t a good sign.

-I don’t care that there’s only a tiny snippet of new footage/dialogue at the end of this trailer for The X Files reboot. Watching it made my heart poop its pants.