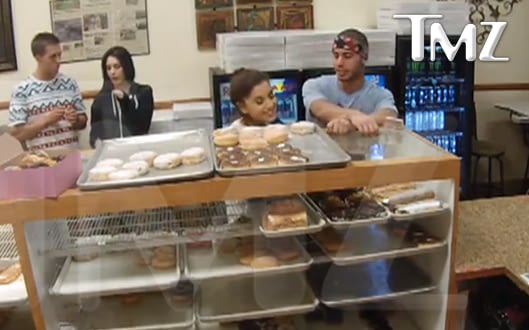 -I see Ariana Grande is still being her charming, modest self. She went to a doughnut shop, where she licked a batch of doughnuts when an employee had his back turned. She was also overheard saying “I hate America.” But it’s totes ok, guys. Her official statement/non-apology makes it clear that the whole thing was just an attempt to fat-shame you. So alls forgiven, right?

-Wait wait wait — is Jon Hamm single after 16 years with Jennifer Westfeldt? For reals? I’m gonna need some better confirmation on this than Star Magazine. What say you, official reps?!

–Kate Middleton went to Wimbledon today and looked fab. Ever since reading The Royal We I can’t help but picture her as a shots-loving, jeans-wearing American in disguise. I know it was fiction and all, but I’m easily misled.

-People delicately tiptoes around those Ben Affleck cheating allegations in their new cover story.  Meanwhile, I want whoever is quoted as a “source close to Garner” to craft every future sentence to ever leave my mouth.

–Amy Schumer tries to smile like a normal person in her show’s season finale, fails miserably.

-Meanwhile, she continues to kill it on her Trainwreck press tour, telling the New York Times: “My whole life, I felt like people wanted the girls to be a little quieter.”

–Channing Tatum‘s reasons for why he would run to Sandra Bullock‘s house in a zombie apocalypse are actually quite solid. “She’s a boss. I just figure she would have a fully stocked fridge and a really cool bar. She’s been a woman in Hollywood and dealt with a bunch of asshole men for so long, zombies are like nothing to her. ”

–Chrissy Teigen is using John Legend’s naked butt to protest Instagram’s nudity policy. I like how she thinks.

-This article about what it would be like if male actors were described the way female actors are in magazine profiles is wonder wrapped in love and hugged by awesomeness.

-You can now watch Paul Rudd get out of prison in this five-minute Ant-Man preview.

-I love how his Ant-Man costar Evangeline Lilly doesn’t care about pissing Marvel off in interviews.

-Simmer down. Jay Z and Beyoncé aren’t actually buying the rights to the Confederate flag.

-How does this kind of outfit even happen to someone like Lily Collins?

–Taylor Kitsch says fan fascination for his FNL character is the “ultimate flattery,” saying, “When I’m at a bar in Austin, guys will come up. The beauty of Riggs, too, is it’s guys and girls.” Wait, I’M going to be at a bar in Austin soon. Is there some sort of booking process I should know about?

-Here’s a great piece about how many female-empowering shows are suddenly on TV.

–Chris Pine tries to save a sinking ship in the trailer for The Finest Hours. Not his finest hour? That Boston accent.