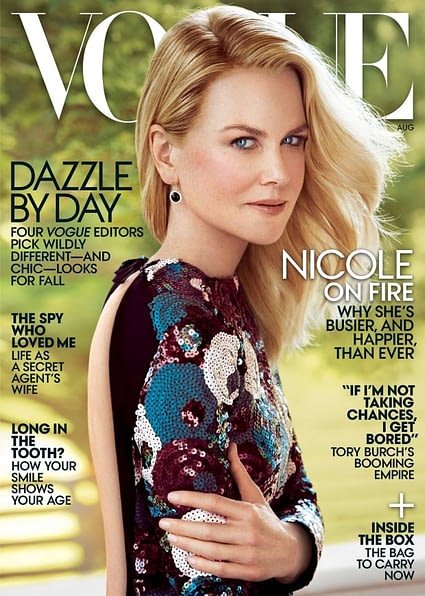 –Nicole Kidman covers the new issue of Vogue, but it’s her 73 Questions video shot at her farm that’s the most interesting part. Her American accent is TERRIBLE, but she pulls off a good Tweety Bird.

-As much as I still hate Amy Schumer‘s GQ cover photo, the interview itself is great. She talks about her plans to campaign for Hilary Clinton, why many female comics seem to end up alone, how Chris Rock helped her, and why she’s anticipating the inevitable backlash. “I truly feel I’m getting a lot of attention right now and it’s just a ticking time bomb. Like, I wonder what the thing is going to be that will make people want to burn me at the stake. There’s no way to control it. I think it will be really arbitrary and a misunderstanding.”

-As if I wasn’t already going to be glued to my TV, The X-Files reboot just cast Robbie Amell and Lauren Ambrose as new agents.

-Speaking of The X-Files reboot, Silicon Valley star Kumail Nanjiani (who stans the show so hard that he hosts a podcast called The X-Files Files), shot a guest appearance last weekend — and his tweets from the set were adorably fanboyish.

-The lines are already being drawn in the sand in the Miranda Lambert/Blake Shelton split. His PR team has come out swinging, making sure there are lots of stories out there about how the divorce is not his fault. Meanwhile, she’s dealing with TMZ’s report that she’s a cheater, fan videos of her breaking down on stage, and male country singers releasing statements denying they slept with her.

-In other ‘love is a lie’ news, Cara Delevingne and St. Vincent have reportedly broken up.

-Here’s photographic proof that Kit Harington and his manbun has joined the Game of Thrones cast in Belfast.

-His costar Gwendoline Christie‘s campaign for Vivienne Westwood is filled with just so much no.

–Elizabeth Olsen and Tom Hiddleston were spotted looking cozy together. I’m gonna need some relationship status confirmation  because I’m kinda super into it.

–Ben Affleck: the only person in the world who can still look like a grump while holding an adorable puppy.

–Charlize Theron invited Barack Obama to a strip club and then worried what Michelle would think.

–Cate Blanchett is developing and directing an Australian TV series and I want it in my eyeballs right now!

-The VMA nominations came out today and Nicki Minaj was totally snubbed for “Feeling Myself” — according to Nicki Minaj.

-I don’t have time to watch all of this Orphan Black Comic-Con panel because of work, life, stuff, but I think Parks and Recreations’ Retta should moderate every single future TV panel based on her intros alone. Donnie IS “Captain Twerk of the Star Hips Enterprise.”

-Vanity Fair interviewed Starlee Kine about her great new podcast, Mystery Show, and she got into the Jake Gyllenhaal phone call.

–Taylor Swift just launched her own line of $60 t-shirts that will only be available in China.

-The Daily Show’s new host Trevor Noah tries to prove that he’s better than his Twitter history would have us believe in his new GQ profile.

-Buzzfeed just ran a great interview with the creator and actress of UnREAL, which gets better with every episode. Vulture even started recapping it this week!

-The Fargo season 2 trailer has arrived, and it looks amazing (or, as Pajiba aptly called it, “an ultra-strength boner pill for Emmy voters.”). It took me a while to recogonize Jesse Plemons, though. He looks, um, different.