-Well, there goes the only reason I ever kind of liked Ben Affleck: he and Jennifer Garner officially announced their split. The exclusive came from People (of course it did; they worked really hard for it, after all) and it comes ONE DAY after their 10th anniversary.  The timing of this matters: under California divorce law, once you hit the 10-year mark, alimony becomes a much bigger deal. So the question is: did they officially split today (which means he let her reach the magic number 10, which might be the most honourable thing he’s done for her in a while), or did they split earlier and just announced it today to make him look better (which is going to be a PR nightmare if it comes out)?  And why didn’t they wait until the end of the week to announce? A US long weekend is a media dead zone. So. Many. Questions.

-Think dating is hard? Try adding time travel like Amy Schumer does in her latest sketch.

–Taylor Kitsch talked about being naked on True Detective. Sigh. Please stop making it so hard to quit that show, Taylor.

-Speaking of FNL alums, Minka Kelly was spotted on a “first date” with Sean Penn at French Laundry. Dammit, French Laundry was on my bucket list and now it’s ruined. RUINED!

-I need to calm down. Luckily, I can stare at these adorable outtakes from Gillian Anderson and David Duchovny’s EW shoot until I’m out of v-fib.

–Angelina Jolie and Brad Pitt were spotted at a London recording studio with Chris Martin.  Either he’s helping them score their next movie, or my dreams about the ultimate Spice Girls cover band are inching closer to reality.

-Everyone’s assuming Britney Spears is throwing shade at Iggy Azalea with this tweet. We can only hope.

–Stephen Colbert just did 20 “no hands” push ups after John Oliver tagged him in a #GiveThem20 post.

-I don’t watch Castle, but lots of people are thinking this blind item has something to do with whispers of discord between Nathan Fillion and Stana Katic. I really hope that’s not true; I love him and I have zero sympathy for well-paid actors who mess up their shows because they can’t keep it professional. We’ve all had coworkers we don’t like. (I’m looking at you, guy who keeps stealing my Coke Zeroes from the office fridge…)

-Just in case you need a good cry, here’s comedians getting emotional in the trailer for the I Am Chris Farley doc.

-Sigh. Game of Thrones won’t have any female directors next season. On the plus side, Transparent’s will have only one cis male director.

-I was kind of holding my breath while waiting for the Magic Mike XXL reviews to land. I loved it but could easily see critics turning on it, so it’s great to see that the heavy hitters liked it.  I especially like how Vox’s review points out how slyly feminist and sex-positive it is. (There’s an early scene in a gay club and I spent the whole time clenched and waiting for one of the queens to become the butt of a joke, and it thankfully never happened.)

-Meanwhile, you can now listen to Matt Bomer’s D’Angelo cover from the soundtrack.

-Congrats to Evangeline Lilly, who is expecting baby #2.

-Here’s a list of all the ridiculous celebrities who don’t believe in vaccines because they’re ridiculous.

-Here’s the trailer for Secret In Their Eyes starring Julia Roberts, Chiwetel Ejiofor, and Nicole Kidman. Looks like we’ve got another annoying Julia Oscar appearance in our near future… 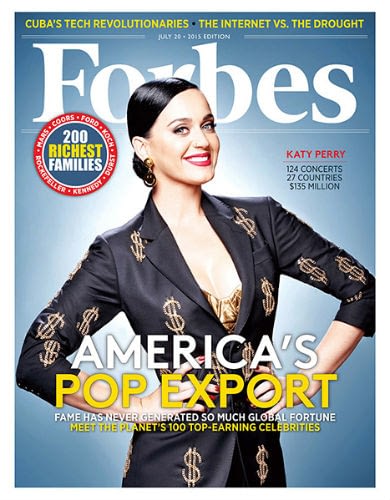 –Katy Perry puts away the whipped cream bra and goes for respectable on the new cover of Forbes, which just released its highest-paid celebs list (she came in at #3).

-There are very, very few people who could wear an outfit to their movie premiere that actually references the movie and get away with it, but Sandra Bullock is pulling it off.

-Now there are trailers for music videos? Oy vey. Here’s a teaser for Rihanna‘s “Bitch Better Have My Money.”

-Speaking of sentences that include Rihanna and bitch, check out her reaction when a BET exec told her she couldn’t throw money into the crowd during her appearance. Seriously, in what other profession/world can you throw something right at someone else’s face and prance away without consequence? (I’m asking because I would very much like to live in that world. Is there a passport application?)

-This might be the best description of Magic Mike XXL I’ve read so far: “It plays like an R-rated Step Up sequel as shot by Soderbergh.” Seriously, this movie needs to get in your eyeballs.

-So it turns out that Kate and Oliver Hudson’s biological father is kind of an ass face.

-I don’t know if the world needs a sequel to My Big Fat Greek Wedding, but the world definitely needs more photos from Nia Vardalos of a shirtless John Corbett. (Anyone else have the urge to rub his tummy because he ate too much chicken? Just me?)

-I’m really looking forward to Amy Schumer’s Trainwreck, but the promo tour is also going to be a treat. She’s already speaking out about her refusal to conform to what Hollywood wants, saying “It’s very therapeutic for me to be like, ‘Yes, I’m not going to look like a malnourished bird.'”

-Also, Amy had a great response to that article from The Guardian criticizing her for racial insensitivity.

-She also says she turned down a Daily Show hosting job offer which, considering the year she’s having, was probably the right call.

-Look, we all have feelings about Paris Hilton and they’re probably not all that warm ‘n fuzzy, but tricking her into thinking her plane was crashing for the sake of an Egyptian TV show seems a bit harsh, no? (And this is coming from someone who once had to schedule her vacation around Paris’ court appearance…)

–Jennifer Lawrence continues to prove that she’s living life better than any of us could ever aspire to.

-Alright, Iggy Azalea. We’ve put up with a lot from you but blaming Britney Spears for your latest flop? THAT IS A BRIDGE TOO FAR, MISSY!

-I really liked this article on how when it comes to TV, plot isn’t important, story is. I think that’s why I had such a hard time getting through this season of Orphan Black. Plot became the most important thing, and it was incomprehensible.

-Speaking of the Clone Club, Tatiana Maslany is in a new music video, playing a bored housewife who gets caught up in daydreams.

-Here’s a great history of the Seinfeld girlfriends, told by the actresses themselves.

-I have started watching Amazon’s Catastrophe yet, but Vulture and Grantland are both calling it the show of the summer.

–Shania Twain talked about that time her and her former BFF ended up swapping husbands, and why they no longer talk. “I don’t see her, ever. I don’t invite that trigger into my life. She’s not my future—she’s not my past.”

-There was no better way to spend an hour this afternoon than by watching the #AskELJames Twitter fiasco. It backfired so beautifully. I was tracking that tag like

-There’s going to be a musical version of The OC. Did Christmas come early?!?

–This deleted scene from X-Men: Days of Future Past makes me sad that Anna Paquin was basically cut from that entire movie.

-Here’s a good rundown of everything we know about Marvel’s movie future. My eyes still haven’t de-glazed from my coworker’s lengthy explanation about why Spider Man is soon going to be a black/Latino teenager (I lost interest after repeated mentions of the words “alternate universe” and “Tony Stark-led Illuminati,” but I’m weird like that…)

–Donald Trump has officially been dumped by NBC (finally) after his remarks about immigrants from Mexico. Cue a million “You’re Fired” headlines tomorrow…

–Kanye West compared himself to Da Vinci and… a chair. Obviously.

-For such a dark show, the gag reel for The 100 is surprisingly funny. I had no idea most of the cast has accents. Does the CW get a group rate on Australians or something?

-Now that it’s legal in all states, celebrities like Ke$ha and Stephen Amell have offered their services for officiating gay weddings.

-Speaking of Stephen Amell, he was in the 6 this weekend and attended the Jay’s batting practice — where he proceeded to hit a home run because he’s stuffed with perfection, deep fried in awesomeness and lightly dusted in sugary supremacy.

-Why isn’t Rashida Jones on the cover of more magazines? Her guide to finding happiness at work in this month’s Wired is awesome. (Even more awesome: she’s co-writing the script for Toy Story 4!)

–Working with Jared Leto sounds about as relaxing and rewarding as you’d expect.

-Today Show co-shot Willie Geist accidentally called Amanda Seyfried “Titsy” this morning, and she laughed it off instead of responding by calling him “Ass Face Dicksy,” which proves she’s a much better person than I.

-I still haven’t finished Orange Is the New Black (only one episode left and then I never have to hear that theme song again!), but I already love this Vulture article based on the headline alone: Is Piper Chapman Actually the Worst?

-Fox’s Sleepy Hollow just pulled out of Comic-Con this year because production on the show is starting sooner than expected. Too bad; I really wanted to watch that panel and see how the cast interacts because the stories about Nicole Beharie are bananas.

-It swells my heart to see all the positive early reviews for Amy Schumer’s Trainwreck movie. Like, there’s serious swelling happening, y’all. I might need an ice pack.

-Celebs took to Twitter to react to the awesome landmark decision to legalize same-sex marriage in all 50 states.

-After the SCOTUS ruling, NKOTB’s Jonathan Knight took his boyfriend’s last name on Twitter, which is the goddamn sweetest.

-A bunch of loonies demonstrated outside a Magic Mike XXL screening to protest Sofia Vergara unwillingness to let her ex unfreeze their embryos. And in case you were wondering, she’s still not in that movie.

-A moment of silence, please: Jay Z and Beyonce were just dethroned as the highest paid celebrity couple by Taylor Swift and Calvin Harris.

-I’m really glad EW released their X Files photos early online, because if I didn’t see this pic of David Duchovny wearing Gillian Anderson like a backpack until my print magazine arrived, I would have scared everyone in my mail room with some stupidly high-pitched squeals. As it was, seeing it at work led to some inappropriate office fist pumping….

-Meanwhile, Gillian Anderson can’t dye her hair anymore without it falling out so she’s wearing a wig in the reboot and she wants everyone to chill the eff out about it already, ok?

-There is going to be not one, but two post-credit scenes at the end of Ant-Man. This is going to make the guy who sat next to me at Age of Ultron and sulked through the credits very happy.

-The latest Legend trailer really doubles down on Tom Hardy. Not that I’m complaining.