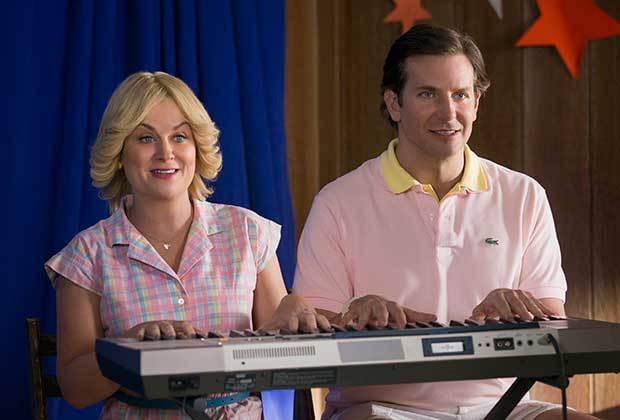 -I’m going to spend a lot of time this weekend reading Twitter reaction to Netflix’s Wet Hot American Summer from people who haven’t seen the original film, ’cause it’s gonna be a gong show. I was describing the movie to a friend of mine recently and said, “So all these famous people play camp counselors and Paul Rudd kills a bunch of kids and Christopher Meloni befriends a can of vegetables and humps a fridge and Bradley Cooper has an extended gay sex scene and Amy Poehler does heroin and it’s SO FUNNY!” He thought I was making it all up. Here’s a tip: watch these five clips first to prepare yourself.

–Janeane Garofalo doesn’t know when she’ll watch the reboot because it’s on Netflix and she doesn’t “use a computer.” Blech.

-Speaking of anti-comedies, here’s the first trailer for season two of You’re The Worst, my favourite new show from last year.

-Another comedy trailer that looks great is Difficult People. How am I not watching this?!

–Amy Schumer and Jennifer Lawrence are hanging out and all is right with the world.

-Things got reallllllll interesting last night when People magazine jumped on the ‘Ben Affleck is sleeping with the nanny’ bandwagon. Think about that for a sec. People was the one who kept running the “nothing to see here!” stories before the split, which earned them the official divorce statement and the first post-split pics from the Bahamas. They even carried Affleck‘s nanny denial yesterday. But now they’ve stopped being his camp’s mouthpiece and have jumped on this story HARD, running “5 things to know about Christine Ouzounian” and her latest pap shots. She doesn’t exactly look devastated at being photographed, huh? This girl is going to be trouble for him.

-In a bid to get Foo Fighters to play their town, a 1,000 locals got together to cover “Learn to Fly” — and it was awesome.

-The actor who plays Stan on True Detective reveals why his character is such a big deal. I’ve watched every episode this season (begrudgingly) and I swear I’ve never seen this dude’s face before. Solid storytelling, guys!

–Beyoncé might join NBC’s The Wiz? But I don’t know if I’m emotionally prepared to switch from hate-watching live TV musicals to regular-watching them!

–Jennifer Beals left her dog in a hot car in Vancouver and a concerned citizen was having none of it.

-Here’s the first trailer for Cary Fukunaga’s Beasts of No Nation, starring Idris Elba as a ruthless mercenary fighter. There’s talk that this could land Netflix its first Oscar nom.

–John Green wrote an essay defending Cara Delevingne following that morning show interview. I wrote a defense, too. Here it is: eyebrows!

-Want to know about Chris Hemsworth’s prosthetic dick but don’t actually want to sit through Vacation? Vulture’s got your back.

–Brie Larson has been on the verge of breaking out for a while now (have you seen Short Term 12? Please watch Short Term 12!), but this trailer for Room might be her big moment. It looks great but I don’t know if I’m going to watch it; that book haunted me.