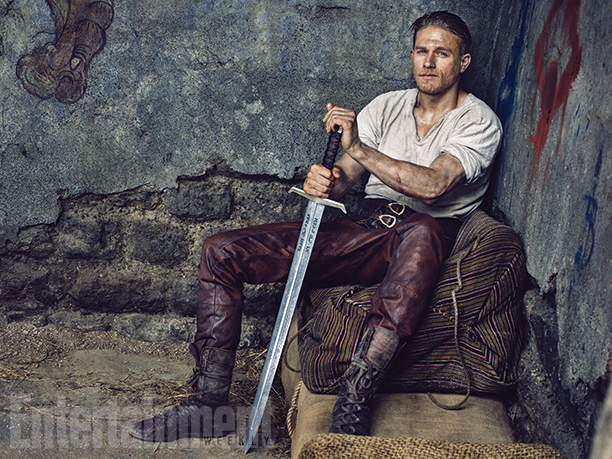 –Charlie Hunnam looks all smoulderific while posing with Excalibur in his new EW cover story. I don’t even care what this movie is about; just take my money now.

-Well, this is total and utter bullshit: Kelly Rutherford can no longer fight for custody of her children in California. There is nothing about this case that has made one iota of sense from the start.

-I don’t think Nina Dobrev’s shoes are too small here; I think her heels are so high that her toes are contorting in weird ways to try to hold her upright. But what do I know? I put on a kitten heel and I’m like Bambi on ice…

-This might be the best news I’ve heard all week: Chris Brown has been barred from leaving the Philippines.

–Norm Kelly keeps proving that he’s the only Toronto city councilor worth following on Twitter. A couple of weeks ago he turned my neighbourhood into a raccoon vigil, and now he’s picking Twitter fights with Meek Mill for dissing Drake.

-Speaking of Twitter wars, Taylor Swift has apologized to Nicki Minaj over that VMA exchange, saying “I thought I was being called out.”

-Also, Katy Perry weighed in on the Taylor vs Nicki drama, but I cannot for the life of me figure out what the hell she’s trying to say. “Finding it ironic to parade the pit women against other women argument about as one unmeasurably capitalizes on the take down of a woman…” What, now?

-I don’t know what’s more surprising: that they’re doing another season of Top of the Lake, or that Elisabeth Moss is returning. I loved that show but it felt like it had a total of 14 viewers.

–Amy Schumer perfectly demonstrates how to handle interviewers who insult your movie and imply that you’re skanky. 10 bucks says that guy asked her for a selfie after they wrapped…

-I feel like Ryan Reynolds is just putting in time with these kinds of films until Marvel puts the Deadpool jumper cables on his career.

-Now that Jon Stewart is on his way out of The Daily Show, here come the not-so-great stories about him.

-Jurassic World is getting a sequel. Y’all see what you’ve done? This is why we can’t have nice things.

-There’s been a lot of whispers about how bad things were on the set of Alejandro G. Inarritu‘s The Revenant. Now the Hollywood Reporter is getting the full scoop, and it isn’t pretty. Damage control this early (the film doesn’t open until December) is never a good sign.

-The action amps up in the latest Mockingjay: Part 2 trailer.