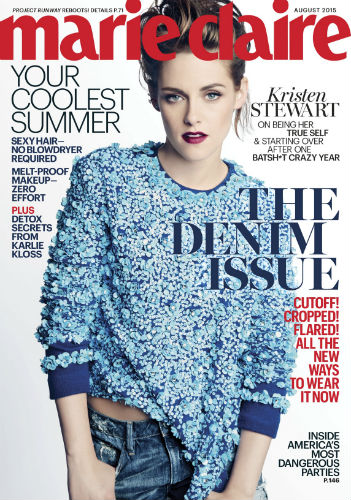 -I love everything about Kristen Stewart’s Marie Clarie cover story, from the styling to her general IDGAF tude to her talking about cutting her hair because it was a “crutch”: “Maybe to most people long hair is prettier. But then what? Is your main goal in life to be desired? That is boring as fuck.”

–Ben Affleck wore his wedding ring to his Comic Con panel, but then took it off later that night, while Jennifer Garner is still wearing hers. What can it all mean?!?

–Jennifer Lawrence talked about reaching a certain level of stardom where she doesn’t have to worry about her appearance as much, and said she wants to hear actresses who are ‘not in two franchises’ talk about their weight.

-No, YOU’RE crying over Lea Michele‘s tribute to Cory Monteith on the 2-year anniversary of his death.

–Channing Tatum continues to be perfect. That is all.

-Wanna see Arya Stark and Harry Potter take a selfie? Sure ya do.

–Mila Kunis keeps a gun at her house but says she wouldn’t give it to her baby. Yay?

–50 Cent has filed for bankruptcy. Cue the terrible math puns.

-The only thing I learned from this Vice article is to not take workout tips from Drake, which was never really a possibility anyway. It also cemented my belief that prowler pushes are stupid and evil and I was totally justified in bursting into tears when my trainer tried to make me do it…

-Lots of TV goodies came out of Comic-Con this weekend. Rob Thomas and Kristen Bell are eyeing a limited time series (which I’d much prefer over another movie), the Arrow is now called the Green Arrow (character, not show title), the Vixen trailer actually looks pretty great, everyone loved the first ep of Limitless (which featured a cameo by Bradley Cooper), fans greeted Jared Padalecki with a special surprise after he recently spoke out about his depression, and the Heroes: Reborn trailer is super spoilery. Oh, and it looks like without Nina Dobrev, The Vampire Diaries can no longer pack Hall H.

-In movie news, Comic-Con brought us new trailers for Batman v Superman (Affleck‘s face is so weirdly angular in this, and the buzz wasn’t great. But the fact that the movie picks up immediately after the ridiculous aftermath caused in Man of Steel and doesn’t let Superman off the hook for it intrigues me), X-Men: Apocalypse (super shaky video quality but it got a great reception from the crowd), the HILARIOUS Deadpool trailer, which was far and away the best received at Comic-Con, and the bananas trailer for Suicide Squad (the crowd was reportedly NOT  into what Jared Leto is doing; I’m more confused by Harley’s lack of pants).