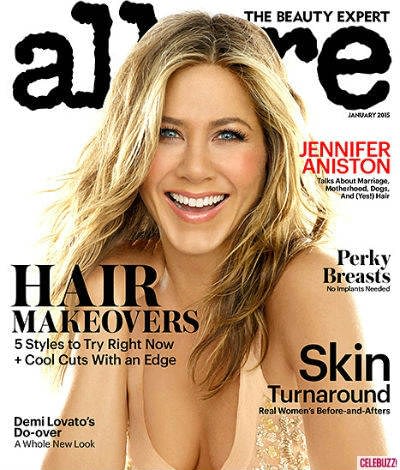 –Jennifer Aniston is trying to win us over with her Oscar campaign — and it’s kind of working. She opens up about feminism and womb-watching in the new issue of Allure. “This continually is said about me: that I was so career-driven and focused on myself; that I don’t want to be a mother, and how selfish that is.”

-Proof that no one is ever completely happy with their body: Scarlett Johansson thinks hers is just “ok.”

-Jesus. There’s video of Chris Pratt singing the Li’l Sebastian eulogy at the Parks and Rec wrap party and it’s killing me. Ahem. I am not crying. My eyes are just sweating.

–Brad Pitt just made blue nail polish a thing for men. Tell everyone you know.

-Ish just got real with the Sony hack. Seth Rogen and James Franco have cancelled all press appearances after the group claiming responsibility for the hack threatened attacks on theatres showing The Interview.

-Meanwhile, the fallout from the hack continues. Aaron Sorkin called the Sony hack ‘worse by magnitudes‘ than the leak of nude photos of female celebrities earlier this year. (Um, one hack revealed information about a multi-billion dollar industry that tightly controls its image via strict PR. The other hack was a sex crime. So….no. No, it’s not.). Sorkin also said some ridiculously stupid shit about how male roles have a higher degree of difficulty than female roles. If Sorkin is so worried about women having complex roles, why does he keep writing scripts like this? His entire behaviour this month makes me want to burn my Sports Night DVDs…

–Julianne Moore has lots of nice things to say about her Still Alice costar, Kristen Stewart.

-Uh oh. That thing happened to Emma Stone where all the camera flashes made her look like she just nose-dived into a giant vat of cocaine.

-Last night, Oprah and Jimmy Fallon pretended they were once in a soap opera together and it was glorious.

-A Wet Hot American Summer series might be coming to Netflix? Yes please!!

-Here’s an excellent interview with Selma director Ava DuVernay. I went to a Q&A with her last week and she was wonderful and articulate. I hope she wins all the awards.

-The new trailer for the final season Glee actually looks…pretty good? I’m sure it’s a trick, though.

-The annual Jimmy Kimmel vs. John Krasinski/Emily Blunt holiday prank wars really stepped it up this year. This is kind of epic.