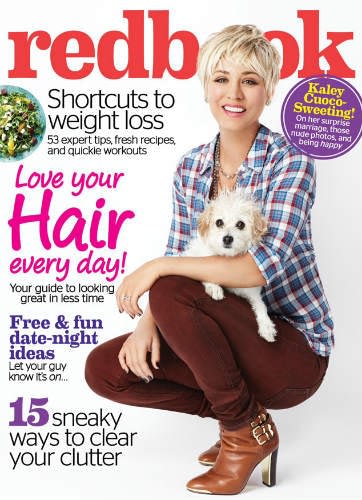 –Kaley Cuoco says she’s not a feminist, she loves acting like a housewife and that her breast implants are “the best thing ever.”  Take notes, little girls. This is super inspiring stuff.

-Well, that didn’t last long. Jeremy Renner and his wife have split after just 10 months of marriage. Between him, Chris Rock and his wife, and Tim Burton and Helena Bonham Carter, it’s been a rough holiday for famous couples.

-In happier couples news, Sofía Vergara and Joe Manganiello are flaunting their new engagement. Like, a lot.

-Also, did Sean Penn propose to Charlize Theron in Paris?

–Ryan Gosling‘s directorial debut is reportedly so bad, it won’t even get a wide theatrical release. (Is anyone else slightly comforted by the knowledge that he isn’t absolutely perfect at everything?)

-I was debating whether or not to go to the gym tonight. Then I saw Jada Pinkett Smith’s new Shape cover and have decided I’m going to live there now.

–Jennifer Aniston, Justin Theroux, John Krasinski, Emily Blunt, Jimmy Kimmel and Howard Stern are all vacationing together in Mexico right now. Your invite probably just got lost in the mail or something.

-Just when we thought the Serial drama had wrapped up, Jay (who refused to be interviewed on the podcast), just gave his first sit-down. You would think he’d have had time by now to get his story straight, but this interview makes even more of a mess of the timeline. [Update: part two of his interview was just posted.]

–Matthew McConaughey made some more totally random commercials for Lincoln in which he spouts total nonsense.

-As they final episodes are about to air, the cast of Parks and Rec try to recap the entire series in just 30 seconds in this new video. Spoiler alert: they fail miserably.

-Meanwhile, Paul Rudd has confirmed he’s coming back for the last season.

-The creator of Black-ish has called out Judd Apatow for  his”obsessive” Bill Cosby rants.

–Mindy Kaling wrote a short for Joseph Gordon-Levitt‘s new TV show and it features JGL and Chris Messina dancing, because she knows what we want.

-In her new interview with Elle Canada, Katie Holmes says of Dawson’s Creek: “I don’t know if I have moved past it, but I don’t really care.” You and me both, sister.

–Benedict Cumberbatch wants to clear up those rumours that he had a dance off with Michael Fassbender at the Golden Globes. “There’s no ‘off’ about it. We were dancing ‘on.'”

–Jake Gyllenhaal and Ruth Wilson are still going strong, which is something of a Christmas miracle.

–Kat Dennings goes to a dark place in the intense new trailer for To Write Love On Her Arms.