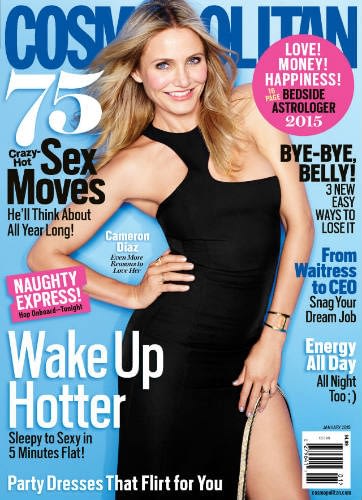 –Cameron Diaz’s Cosmo cover is pretty, but I just wish the pose wasn’t so awkward. Who stands like that IRL? “I’m going to show you the top of my thigh even if it means I need to dislocate my hip, dammit!”

–Anna Kendrick sings the shit out of Into the Woods’ “Steps of the Palace.” I’m going to a preview screening tonight — can’t wait!

–Emily Bett Rickards is having a good day. Not only did the ratings of her show just hit a series high, but she looks really great on the cover of Runway.

-On late night, Mindy Kaling told a funny story about that time she got wasted at Conan O’Brien’s house… and he wasn’t even home.

–Martin Freeman is totally over your obsession with Sherlock. Man, I need to stop reading interviews with this guy. I don’t even watch that show and this bugged me.

-Another think-piece about network sitcoms. There’s at least three a week of these at this point.

–Channing Tatum drew his wife some pictures for her birthday, and they’re adorable.

–Nick Offerman wrote a song about whiskey and it speaks to the very core of my soul.

-Meanwhile, Nick Offerman is being courted for the next season Fargo, which would be FANTASTIC.

–Jon Stewart‘s opening last night on Eric Garner was great: “If comedy is tragedy plus time, I need more f**king time. But I would really settle for less f**king tragedy.”

–Ethan Hawke once overheard a Houston bridal party insulting his appearance. I believe it. My friend and I met him once and he was wearing a black suit jacket that had weird white stains on it, which kind of ruined Troy Dyer for me…

–Blake Lively‘s pregnancy is not doing her roots any favours. Sadly, I can’t even use that excuse.

-I love that this hideous Ariana Grande photo has turned into a meme. Karma at work.

–Miley Cyrus wore silver pasties and sang about her dead dog but it was for “art” so it’s all ok, I guess?

-Weird! New Zealand got to see the Jason Ritter/Alexis Bledel sitcom Us & Them, even though Fox yanked it before even one episode got to air here. Not fair.

-I can’t believe that Lifetime is going ahead with the Whitney Houston biopic after the Aaliyah fiasco, but the trailer just landed.

-Get ready to cringe: here are Mariah Carey‘s isolated, unedited vocals from that Christmas performance.

-Black Mirror continues to garner raves from critics. Sorry, family, but it looks like I’ll be spending the entire holidays binge-watching all the stuff I missed this year. Priorities, ya know?

–Krysten Ritter was just cast as Jessica Jones in Marvel’s new Netflix series. Twitter seems divided on her ability to pull it off, but I love her so I’m on board.

-After Frances Ha I vowed I would never again get suckered into watching another Noah Baumbach film, but the trailer for While We’re Young is kind of cute. I’ve lived that scene where Naomi Watts tries to take a hip hop class!  I’m sure it’s some kind of trick, though.

-The new Terminator trailer looks really dumb, but it might be the kind of dumb that’s also really fun. I can’t tell.