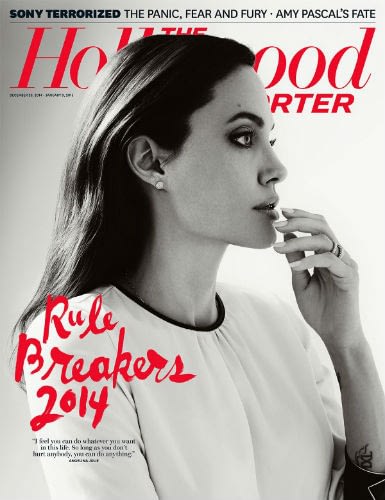 –Angelina Jolie is profiled in the new issue of The Hollywood Reporter, but her daughter Shiloh steals the show. Meanwhile, Jolie says she hires a cyber security team to protect her kids from bad things on the Internet. How does that work, exactly?

–Chris Martin joked that Angelina Jolie got him to write a song for Unbroken by having a bunch of ex-Navy SEALs kidnap him and take him to an undisclosed location, where Brad Pitt was doing pushups and Angelina was wearing a crown. Hey, I’ve had this dream!

–Anna Kendrick was a total charmbomb on The Daily Show last night, where she told a funny story about how Chris Pine almost killed her on set. (Speaking of Pine, I liked Into the Woods a lot, but I LOVED him in it. That movie has a deep bench, but he totally steals it.)

-So The Interview thing continues to be a mess. Lots of people have spoken out about how Sony’s reaction is ridiculous and cowardly, including a bunch of celebs (Connie Britton’s tweet was my favourite, while Stephen Amell’s was my least fave — but he recovered nicely).

-The fallout continues. Now Steve Carrell‘s North Korea film has been given the boot.

-Meanwhile, Jimmy Kimmel has started a campaign to get Fox News to air The Interview in its entirety, and Aaron Sorkin is blaming the media (shocker!).

-Also, a  new batch of emails from the Sony Hack now involve a producer saying that it’s bad business to keep casting Denzel Washington in movies because international audiences don’t want to watch black actors. This is the story you can point to the next time someone (*cough* Sorkin *cough*) says the media shouldn’t be reporting on the hack because there’s a lack if newsworthiness.

-TV critics and fans spent the afternoon tweeting the #BestTVLines2014, and it gave me a serious case of the feels and/or lolz.

-Allow Tom Hiddleston to wish you a Merry Christmas through song.

–Jennifer Aniston has an “Oscar strategist.” I want that job SO. HARD.

-In her new interview with Allure, Demi Lovato says Kim Kardashian should get a lot of the credit for helping women accept their curves.

-The final episode of Serial dropped this morning. I haven’t listened to it yet, but lots of people have lots of thoughts that I can’t wait to devour later tonight.

-So Selena Gomez is still on the Justin Bieber drama-go-’round, huh?

-The Honourable Woman is now on Netflix. I really liked this interview with Maggie Gyllenhaal about it. “I can be very mercurial, I can get very mad, and I can get very emotional.”

-I love this story about how Jane Austen inspired the Ross/Rachel arc on Friends.

-Here’s the trailer for A Little Chaos, starring Kate Winslet and Alan Rickman. This was not super well received when it premiered a few months ago at TIFF.