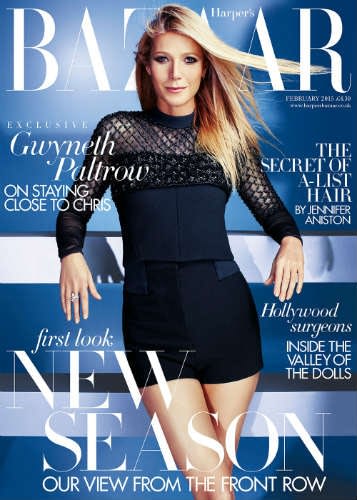 -With the exception of the part where she claims she’s a self-made woman who “earned everything herself” and didn’t benefit from having famous parents, Gwyneth Paltrow actually comes off rather well in her new Harper’s Bazaar cover story.

-It happens every year; we always lose a famous person over the holiday break. This time, the sad honour goes to Edward Herrmann, best known as Richard Gilmore.

-There are lots of ugly rumours already flying about Jeremy Renner‘s divorce — which dovetail pretty well with the rumours that were circulating well before it.

-I have a really hard time disassociating celebrities’ work from bad behaviour in their personal lives. It’s why I can’t watch Sean Penn on the big screen without remembering that he once hit Madonna with a baseball bat, why I’ll never, ever buy Chris Brown‘s music, and how every time I see Terrence Howard I can’t help but think of his terrible opinions about women. So I’m glad someone pointed out that when Katherine Heigl was promoting her show, the press kept asking about her being “difficult,” but Howard is currently promoting Empire and no one is quizzing him about his violent past.

–Macklemore sat down with a radio station for a frank discussion about white rappers and the appropriation of hip-hop, and it was actually pretty great.

–Mariah Carey reportedly fell asleep in her car on the way to a nail appointment and her assistants were too afraid to wake her. Sounds about right.

-EW subscribers are getting a special edition of the Parks and Recreation cover and the placement of Jerry/Gary/Terry is beyond perfect.

-Is John Mayer trying to send us secret messages through Instagram, or is he just really terrible at Photoshop?

-Oh goodie. Now there’s an interview with a reporter who interviewed a witness who refused to be interviewed for a podcast.

-Oh for crying out loud. The Intercept says they’re now trying to interview more people who refused to appear on Serial.

–Liam Neeson says he gets letters from stupid Americans who are afraid to travel to
Europe for fear of being taken like in, um, Taken.

–Kate Hudson tried to Facetime Justin Timberlake — but he was having none of it.

-Here’s the second trailer for Cinderella. I really don’t think we need another version of this story, but the pull of Cate Blanchett and Helena Bonham Carter is strong.