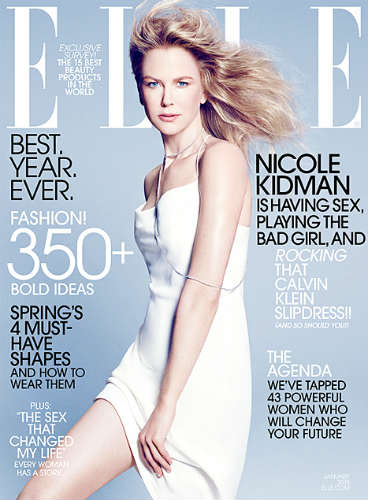 -In her new Elle cover story, Nicole Kidman reveals she married Keith Urban after dating him for only a month. She also says she’s still hoping to have more kids. “I had my last one at 43. My grandmother had her last at 49. Every month, I’m like, ‘I hope I’m pregnant!'” (I like how she shoos away the publicist who tries to suppress that quote.)

–Jessica Chastain‘s new InStyle cover is thisclose to being perfection. But what’s with that adult diaper looking thingy?

–Kate Hudson‘s engagement to Matt Bellamy of The Muse has ended after three years –and she’s already been linked to Dancing with the Star’s Derek Hough.

–Joaquin Phoenix announced on David Letterman’s show that he’s engaged to yoga instructor Aria Crescendo (best. name. ever.), but then rescinded the announcement, saying he made the whole thing up because he “wanted the audience to like me.” Not weird at all.

-In other “celebrities make no sense” news, Mark Wahlberg wants his felony record wiped clean… so he can become a cop.

–Kate and William met Beyonce and Jay-Z last night at a basketball game and the Internet melted into a puddle of feels.

-Community shot its 100th episode and Castle’s Nathan Fillion sent a coffee truck over to the set to help them celebrate — and remind everyone that he’s better than Joel McHale.

–Seth Rogen says Kanye West once picked him up in a van and proceeded to freestyle the entirety of his new album.

-Speaking of freestyling, Scarlett Johansson showed off her skills.

-As someone who made her bones in digital media, I really loved this takedown of The Newsroom. Meanwhile, Emily Nussbaum tweeted this video about Louis CK talking about how he LOVES hate-watching Sorkin shows, and it’s great.

-Boyhood is picking up some serious Oscar steam. I definitely recommend seeing this movie, but this featurette does a pretty good job of summing it up in 11 minutes.

–Azealia Banks has some really strong feelings about vegans.

-I have no idea why Gawker thinks this Paul Reiser email to Sony about wanting more Mad About You DVDs is sad. He’s pretty funny and respectful, and it doesn’t seem like a royalties grab.

-Speaking of Gawker, their annual guide to the Williams-Sonoma catalog is one of my favourite holiday traditions.

–Amy Poehler says she ransacks homes she visits and wrote most of her book topless.  She also talks about having dance parties with the Parks and Rec cast in her trailer.

-Why is Paul Giamatti in this new San Andreas movie with The Rock. Does he have a big mortgage payment due or something?

-Here’s a new clip from The Duff, which basically stars most of my fantasy TV casting league.

-And here’s the first trailer for The Walk, starring Joseph Gordon-Levitt. Just watching this makes my palms sweat.