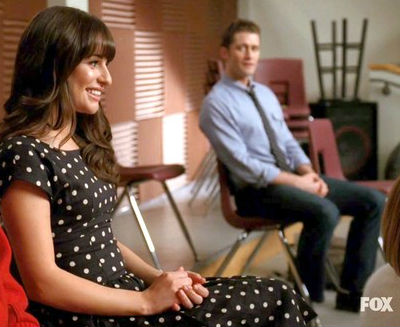 –Lea Michele dodged a question about what Matthew Morrison is like in bed, saving us all from untold amounts of therapy.

–Miley Cyrus reportedly misses Liam Hemsworth and wants to get back together. Why?!

-The Kimye wedding may be happening right now. It’s probably best to avoid Twitter for the next 72 hours or so.

-Here’s the trailer for Jennifer Aniston’s Life of Crime, which was well-received last TIFF.

–Robert Pattinson needs a hug: “I’m kind of like, way too sensitive to criticism; I’ve got enough criticism on one front.”

-Meanwhile, critics are raving about Kristen Stewart‘s performance in Clouds of Sils Maria, saying it will fundamentally change your perception of her. I just wish she wore a different outfit to the Cannes premiere.

-I can barely believe it, but this teaser makes it seem like The Comeback is really, truly returning to HBO. Got it?

–Taylor Swift wears shoes that help her pretend she’s a different person. That’s a lot of pressure to put on a pair of oxfords.

-Fanboys everywhere are freaking out about the news that Edgar Wright has dropped out of Marvel’s Ant-Man due to “differences of vision.”  What was the point of hiring him if they didn’t want an Edgar Wright-y movie?

-What happens when Lance Armstrong plays Cards Against Humanity? Things get awkward, that’s what. Celebrities: they’re just like us!

-Following reports of a “touchy-feely” dinner, Meryl Davis and Maks Chmerkovskiy were asked point blank if they’re sleeping together.

-A new book on underground poker calls Tobey Maguire “the best player and the worst tipper.”

–Katharine McPhee has filed for divorce from Nick Cokas 7 months after her cheating scandal.

–Twitter users have responded to being featured in Jimmy Kimmel’s “Celebrities Read Mean Tweets About Them.”

-Information about the new characters that will be featured on next season’s Game of Thrones has leaked.

-Speaking of GoT, someone gave Brienne and Podrick the Perfect Strangers theme treatment and it’s amazing.

–Hugh Jackman says he hated having to diet while shooting X-Men in Montreal because of all the delicious food.

–Rachel Bilson bared her baby bump in a bikini while vacationing with Hayden Christensen in Barbados.

-A new teaser for The Leftovers has arrived. I’m super intrigued by this show.

-Speaking of TV, here are the five toughest timeslot battles in the new fall season.

-Here’s a new trailer for Red Band Society, one of the most buzzed about new series for fall. Is that Ricky from My So-Called Life?! YES!!!!