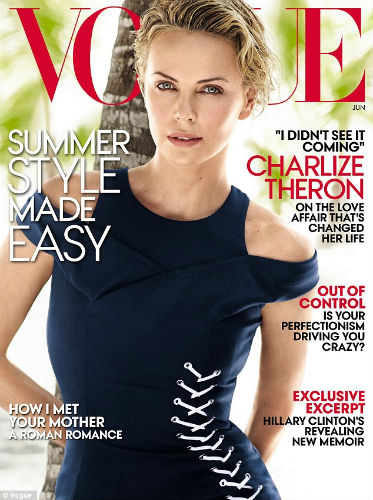 –Charlize Theron covers the June issue of Vogue, where she talks about dating Sean Penn after being friends with him for nearly two decades.

–Jimmy Kimmel’s Mean Tweets series will never get old. Up this time are Julia Roberts, Emma Stone, Matthew McConaughey and more — though Gary Oldman‘s reaction is the best.

–Skylar Astin has been confirmed for Pitch Perfect 2. Wait, was that ever in doubt? Because there’s no aca-awseomeness without Jesse!

–Emma Thompson talks about cracking penis jokes, hating Twitter and finding rich people’s conversations “exhausting” in a new interview with Vanity Fair. There is no end to my love for her.

-Oh. My. God. There is a very dubious (but very awesome) report about Chris Martin taking his kids to a fast food restaurant. I so want this to be true.

–Snooki says she “did every interview drunk” in her Jersey Shore days. How is that different from now?

–Will and Jada Pinkett Smith might be under investigation by Child Protective Services for that photo of Willow in bed with a grown ass man. I wonder if she soon be living with her auntie and uncle in Bel Air?

-Jimmy Fallon has a Stanley Cup bet going with the Montreal Canadiens, and it’s pretty great.

–Charlie Sheen got all pissy and wrote a Twitter rant against Rihanna because she declined to meet him when they both ended up at the same restaurant recently. Smart girl, that one.

–Rihanna and Beyoncé reportedly get $100,000 for attending fashion shows. Worth every penny.

–Jen’s having a rough week: she also told that story on Seth Meyers last night about how she threw up at an Oscars after-party and Miley Cyrus told her to “get it together” – and then Miley said she was lying.

-Everyone in the Firefly cast is still awesome, just in case you were worried.

-Did anyone else cringe a lot while watching Brad Pitt dance at the Bruno Mars concert? I mean, it wasn’t Tom Cruise-levels of horrifying, but it was still kinda wince-y. When Michael Strahan was covering it on this morning’s GMA, he was all “what’s Brad doing with his hands? We need to work on that.”

–Lupita Nyong’o appeared on Mexico’s version of Sesame Street. It’s in Spanish, but I can only assume she’s being adorable.

–Kirsten Dunst and Isla Fisher are buddies. Who knew?

–Tina Fey and Amy Poehler roasted Don Rickles and it was glorious.

-Holy mother, the Lizzie Bennet Diaries just posted a new video even though the series ended a year ago. And it’s called “Bonus 1”. Does that mean Bonus 2, 3, 4, and 5 are coming?! This is giving me all the squees.

–Michael Fassbender and James McAvoy were banned from using golf carts on the X-Men set because they kept getting into bloody accidents — but that didn’t stop them from roping Hugh Jackman and Nicholas Hoult into their shenanigans.

–Nikki Reed has filed for divorce from Paul McDonald two months after they announced their split.

–Jason Segel wrote a children’s book. Between this and his puppet obsession, he really is just an overgrown kid, huh?

-A burglar scaled the walls of George Clooney’s Lake Como villa and stole some wine from his cellar. Seems about right.

–Justin Bieber was spotted getting close with supermodels Barbara Palvin and Adriana Lima at Cannes because there is no justice in this world.

-I understand why AMC decided to break Mad Men season seven into two halves, but I still hate it.

-Sad: The Shield’s Michael Jace has been formally charged with murdering his wife.

-Who knew that Ron Weasley could sing?

-People were tweeting from the Blended premiere last night, saying that Andy Dick was stuck behind barricade yelling “get me the f in bro” to Adam Sandler.

-The Kimye wedding is this weekend, and her clan has already invaded Paris. Oh, and Kim has Jennifer Aniston’s hairstylist on call for the entire weekend.

-I don’t watch American Idol but I tuned in for a bit of last night’s finale and was amazed how much I liked Jennifer Lopez (I think her interactions with Keith and Harry humanize her). The judges all performed together — as did Ryan Seacrest tried to sing, too.

-The trailer for the Roger Ebert documentary Life Itself looks beautiful.

–Yasiin Bey, aka Mos Def, canceled his US tour amid rumours that he was forbidden from entering the country.

-Why has everyone started posting bath selfies? From Miley Cyrus to Kelly Rutherford, I clearly have to start weeding out my following list on Instagram.

-If you don’t watch The Americans, you should really catch up over the summer. Last night’s finale was devastatingly good.

-The first teaser for season two of Masters of Sex is all about the love triangle.

-Here’s Kristen Stewart and Juliette Binoche in the trailer for Clouds of Sils Maria, which will debut at Cannes.

-Canadian wunderkind Xavier Dolan’s Mommy is killing it in Cannes. Critics are raving about it and it might even win the Palme d’Or.

-I love and adore Emma Stone and Colin Firth, but watching them get romantic in Woody Allen’s Magic in the Moonlight? I’m just not sure I can get on board with this.