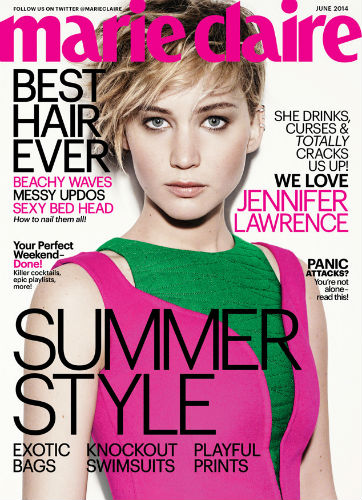 -I’m not in love with this Jennifer Lawrence cover, but the interview is great. She says she’s ready for the inevitable backlash (“Nobody can stay beloved forever. People are going to get sick of me”), talks about how she makes it work with Nicholas Hoult, sounds off on her GIFification, and says fame made her “closed off” and “rude.”

-Remember those cute photos of Jon Hamm and Elisabeth Moss  walking around NYC last week? Of course they immediately led to some ridiculous rumour about them hooking up. They are not.

-Damn you and your irrepressible adorableness, Tom Hiddleston! That’s not even the comic book character you play!

-Just like Will Smith, Jada Pinkett Smith thinks it’s no big deal that her 13-year-old daughter took a photo in bed with a shirtless 20-year- old actor — though she was a lot more defensive about it. The phrase “covert pedophiles” was thrown around.

-There are some unconfirmed reports that Chris Martin and Alexa Chung were spotted having dinner in NYC, which should do nothing to quash those rumours that she was the reason behind his conscious uncoupling.

-Meanwhile, Gwyneth Paltrow got defensive in this week’s issue of GOOP, suggesting her working mother quote was taken out of context.

–Terry Crews has been named the new host of Who Wants To Be A Millionaire, which is great because everyone in the world should know his name — and his dance moves.

-Surf’s Down: Gerard Butler bailed on that ill-advised Point Break remake due to “creative differences.” Who wants to bet those differences were with the gym?

-This might be the first trailer for Seth MacFarlane’s A Million Ways to Die in the West that made me kinda sorta maybe not want to avoid it at all costs. Possibly — and only because it features Sarah Silverman explaining vaginas.

–Seth MacFarlane could use the support. His terrible show Dads was just canceled (deservedly so). Less deservedly, the awesome Enlisted also got the axe. So did Surviving Jack, which I didn’t watch but heard only  great things about.

-In other TV news, The CW just renewed Hart of Dixie and Beauty of the Beast (really?!), but cancelled Star-Crossed and The Carrie Diaries. They also picked up four new dramas, including Veronica Mars creator Rob Thomas’ iZombie, and the Arrow spinoff The Flash — which I’m excited about because it means Tom Cavanagh will be back on our TVs! Also because Arrow has been having an absolutely killer season.

-In other TV news, Debra Messing is returning to NBC, as is HIMYM’s Mother.

-Did Shia LaBeouf just burn those terrible, terrible pants of his?

–Robert Pattinson and Guy Pearce go head-to- head in an intense new clip from their Cannes entry The Rover.

-Last week I mentioned I could never see the point of paying for a photo opp with a celebrity (except for maybe the cast of Being Human, ’cause those freaks be crazy). Avril Lavigne fans learned their lesson after paying nearly $400 for these super awkward photos.

-The Clueless cast was rollin’ with the homies earlier this week.

–Reese Witherspoon swears like a trucker in Cara Delevingnes’ Instagram videos: “If you force me to say your last name, I’ll be f**ked…I love you Kara, Cara, I don’t know what your f**king name is.”

–Billy Eichner is on a roll this week. He also played a game with Sean Hayes called “Who Is The Most Famous Person You Can Get On Your Phone?”

-Ruh roh. Elizabeth Banks is being sued over Walk Of Shame.

–Paula Patton opens up about her recent separation from Robin Thicke: “There’s a deep love there.”

-Lost’s Michael Emerson tried to use Pharrell’s “Happy” to prove he’s not as evil as he looks. It didn’t work.

-Fun: Allison‘s musical in Orphan Black is based on real show that debuted in Toronto.

–Ben Affleck was banned from a Vegas casino for card counting during blackjack. I really could have used him last weekend…

–Sarah Jessica Parker and Anna Wintour critiqued men’s fashion at the Met Gala on Seth Meyers‘ show — and said only one guy got it right.

–Bryan Cranston was on Fallon this week, where he learned that words are hard.

–Jason Dohring is shooting a Hallmark movie in which he plays a single dad and I want it in my eyeholes immediately!

–Amber Heard looks as uncomfortable about being held by Johnny Depp as we feel about seeing it.

–Sarah Chalke and Donald Faison have a secret handshake, which makes me miss Scrubs even more.

-In other movie news, the final trailer for Disney’s Maleficent is here.

–Brangelina have started promoted the movie, and they look amazing. I’m glad his hair situation is finally under control.

-The new trailer for Dawn of the Planet of the Apes is actually kinda great. Gary Oldman and Keri Russell FTW!