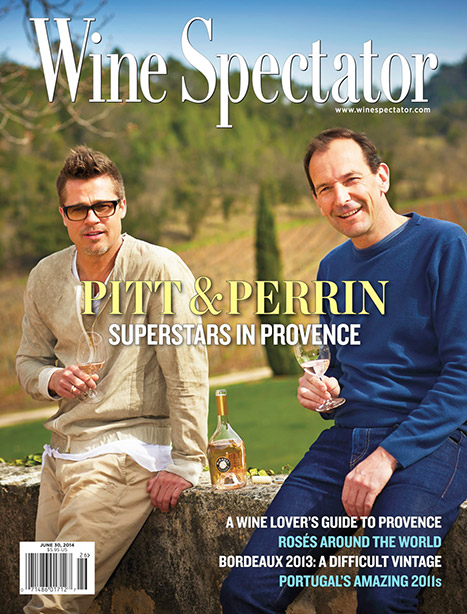 –Brad Pitt covers the new issue of Wine Spectator, where he talks about owning a winery. I must admit, his Miravel rosé is one of my faves.

-Buzzfeed has a pretty great, in depth article on Angelina Jolie’s perfect publicity game. Between this and recent reports of her flawless behaviour at the Maleficent junkets, I wonder if her attitude has begun to rub off on Brad Pitt yet? I still haven’t forgiven him for that 2009 roundtable when he was bellyaching about having to promote his movies, while Robert Downey Jr. and Mickey Rourke sat across from him, looking dumbfounded.

–Brad Pitt‘s red-carpet attacker Vitalii Sediuk faces criminal charges — and was fired from his network two weeks ago. Also, Pitt got a restraining order against him.

-Are Sandra Bullock and Chris Evans dating? (When I first saw the headline, I thought it was Chris Klein and was horrified. Chris Evans, though? Totally on board.)

–Kimye‘s wedding kiss is the most liked photo on Instagram ever. It dethroned a Jelena pic, so the bar was low.

–Pharrell said he’s not a feminist — and then proceeds to say a whole bunch of feminist things. Who wants to break it to him?

–Gwyneth Paltrow did a duet with Steven Spielberg’s daughter at a fundraiser this week.

-Meanwhile, Gwyneth continues to get slammed for her comment comparing cyberbullying to war, this time by Green Beret Bryan Sikes.

-Speaking of celebrities being criticized for making stupid metaphors about fame, I’m really disappointed in Charlize Theron‘s comment about how being written about is like “feeling raped.” It’s even worse than Jennifer Lawrence‘s recent rape comment which, though admittedly terrible, was an ill-advised joke on the same level of the other r-word. When Charlize used the word rape, she was actually talking about rape. And she didn’t recognize her error or take it back, even when the interviewer commented on her “strong” choice of words. I expected more from her.

-I don’t think the world needs a new Terminator movie, but even I must admit that Game of Thrones’ Emilia Clarke looks totally badass.

–Lupita Nyong’o optioned the rights to Chimamanda Ngozi Adichie’s novel Americanah, which is the next on my reading list.

-Brace yourself for a big-ass wave of nostalgia as you gaze upon these photos of a Wonder Years cast reunion.

-The guy who caused the Red Wedding on Game of Thrones took the cutest photo with a fan ever. He’s currently taping The Strain in Toronto, and I keep seeing him. He’s so smiley and nice IRL!

-Now that the Habs lost, Jimmy Fallon wants to collect on his bet.

-The MPAA has slammed Eva Green’s Sin City 2 poster for being too risque, mostly because it’s all about the boobies.

-I had no interest in watching the terrible-looking Undateable show anyway, but Chris D’Elia’s shitty comments about #YesAllWomen just guaranteed I won’t.

-I liked this article on what Kevin Reilly’s departure means for the future of Fox — and network TV in general.

-How did I not know that Zachary Quinto and Jonathan Groff used to date?

–Michael Fassbender and James McAvoy showing off their Ian McKellen and Patrick Stewart impressions to the men themselves is priceless.

–Norman Reedus and Aaron Paul are in one photo. Did the internet just melt?

-The trailer for The Book of Life movie, featuring the voices of Channing Tatum and Zoe Saldana, is total eye candy.

-Here’s the trailer for A Walk Among the Tombstones. Hasn’t everyone learned yet not to piss off Liam Neeson?! It never ends well!