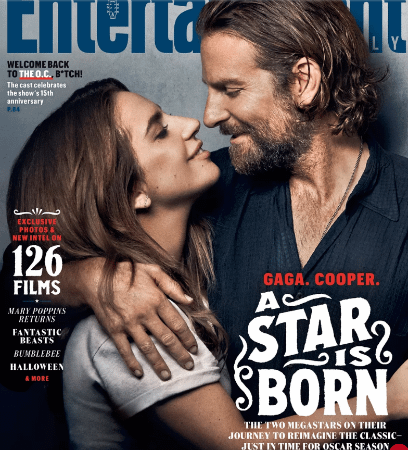 –Lady Gaga and Bradley Cooper are covering EW’s fall movie preview, in which they talk about their friendship, the day Barbra Streisand came to set of A Star Is Born, and Gaga losing her friend to cancer the day of her big performance scene: “We were supposed to shoot in, like, 30 minutes, and I left the set because her husband called me and I could hear her in the background and I just got in the car and drove. I missed her by 15 minutes and she died. I literally laid with her, with her husband, and their dog, and his son… When I came back, Bradley was so gentle with me and we got through it. I performed the song. He was like, ‘You don’t have to do it again. It’s okay.’ All I ever wanted to do was sing. I’ll never forget that day. It was really a special scene, and I’ll always remember that moment.”

-Angelina Jolie‘s team is striking back against Brad Pitt‘s claims that he’s paid her millions: “Brad was asked to assist in the expense of a new home for Angelina and the children, but instead he loaned Angelina money, for which he is charging her interest on a payment plan…A loan is not; however, child support and to represent it as such is misleading and inaccurate.”

–Madonna does not hold back when talking about the state of music today: “Everything’s so formulaic, and every song has 20 guest artists on it, and everyone sounds the same.”

–Ewan McGregor took nine months off to spend time with his kids — which sounds swell until you realize it was probably because his family imploded when he left his wife of 22 years and started dating Fargo costar Mary Elizabeth Winstead.

-Reviews are starting to come in for Crazy Rich Asians and it’s currently at 100% fresh on Rotten Tomatoes. I. CANNOT. WAIT.

–Gabrielle Union was asked to host a Crazy Rich Asians screening and she turned it down for the best possible reason, in the best possible way: “We will pay for a screening, we will support it, we will amplify it, but it should be an Asian celebrity or influencer or business person that you’re looking to and the rest of us should be amplifying that message.”

-This is a great cover story on Blackish star Yara Shahidi.

-As the writers prep for the third season of Atlanta, Stephen Glover, Donald Glover’s younger brother and a writer and producer on the show, says that the comedy will get “weirder.” After the Teddy Perkins ep, I’m not sure how that’s possible.

-In a new interview with Hollywood Unlocked, Love & Hip Hop: Atlanta star K. Michelle talked about dating Idris Elba. When asked about their sex life, she sat up and exclaimed, “Amazing head. It was good! I remember that head!” Can she do all the interviews from now until forever?

–Beyoncé and Jay-Z are such a force to be reckoned with, South Carolina schools are letting kids out early the night of their concert.

-God, I love that Natasha Rothwell is blowing up. She’s the best thing about Insecure, a show that’s already filled with good things.

-Black women are dominating magazine covers this month. It’s about time. We need to do more than just put POC on the covers, but it’s a start.

–Ruby Rose got emotional on the Tonight Show when she discussed landing the Batwoman role on the CW. “Growing up watching TV, I never saw somebody on TV that I could identify with, let alone a superhero.”

–Joseph Gordon-Levitt is out here schooling dumb men about the real point of 500 Days of Summer.

-This is a good deep dive into the world of sketchy on set tutors in Hollywood.

–Maggie Gyllenhaal becomes overly invested in the success of a promising student in the trailer for The Kindergarten Teacher, which was a hit at Sundance and snatched up by Netflix.

–Michael Moore looks at post-Trump America in new documentary, Fahrenheit 11/9, which is coming to TIFF.

Cameron Diaz Talks Being 41 and Childless in Esquire