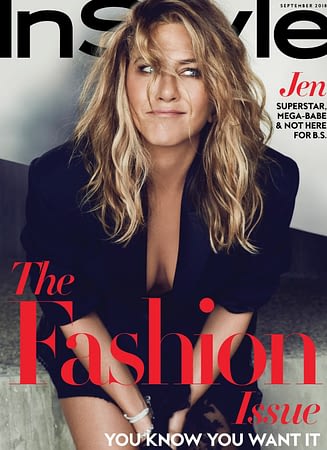 -In an Instyle interview with her pal Molly McNearney — Jimmy Kimmel‘s wife — Jennifer Aniston talks about her recent divorce from Justin Theroux (“The misconceptions are ‘Jen can’t keep a man,’ and ‘Jen refuses to have a baby because she’s selfish and committed to her career.’ Or that I’m sad and heartbroken. First, with all due respect, I’m not heartbroken. And second, those are reckless assumptions. No one knows what’s going on behind closed doors”), shooting a film with Dolly Parton (“She’s magic”), and a possible Friends reunion (“I fantasize about it. It really was the greatest job I ever had. I don’t know what it would look like today, but you never know. So many shows are being successfully rebooted.”)

-I’m loving that that cast of Crazy Rich Asians is getting magazine covers. I’m rooting for this movie to make a million kajillion dollars.

–Topher Grace does this thing where he edits down movie franchises into one concise cut. (His Star Wars prequel edit is legendary.) Now That 70s Show star has blessed the world with a 2-hour version of The Hobbit trilogy.

–Chris Hardwick is not just returning to work following those sexual assault allegations, he’s picking up more gigs. Besides his Talking Dead job, he’ll host The Wall and is set to appear as a guest judge on AGT after.

-Set It Up’s Glen Powell will be in Top Gun 2 after all, just in a different role. I wonder if this is in response to the social media outcry after Miles Teller got the original gig over him?

-These photos of Reese Witherspoon throwing ice cream at Meryl Streep on the set of Big Little Lies has me *very* excited for season 2.

-Everyone is pissed that Jennifer Lopez will receive the Michael Jackson Video Vanguard Award at the VMAs instead of Missy Elliot. Except, apparently, Missy Elliot.

-I tried to watch the first season of The Sinner but I thought it was horrible (and not because of Jessica Biel, surprisingly!). But the second season arrives this week with good reviews — and the presence of Carrie Coon, who makes everything better.

-Despite a cast letter asking for James Gunn to be reinstated as the director of Guardians Of The Galaxy Vol 3, Disney is not planning on rehiring the filmmaker after offensive tweets from his past resurfaced. “I don’t see Disney re-hiring him,” says one person close to the matter tells Variety.

–Ian Somerhalder says he could no longer be part of the The Vampire Diaries cast’s group text because he’s a father now and can’t be bothered by people’s silly emojis. Sure.

-It’s a good day for listicles if you’re a TV fan. The Ringer pulled together the best 100 episodes of the century (gotta say, I didn’t predict The OC pilot beating Breaking Bad’s “Ozymandias,” but I dig it!), while  TV Insider chose the 65 best episodes of the 21st century (another good list, but who picks Buffy’s musical over “The Body”?!).

-Wait, so Anna Wintour is NOT leaving Vogue? And she may have pulled a Miranda Priestly? That’s delicious!