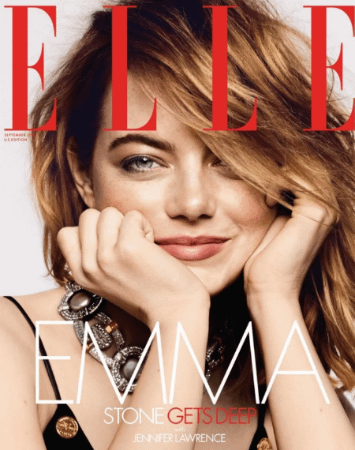 -In her new Elle cover story, Emma Stone talks to BFF Jennifer Lawrence about social media (“I think it wouldn’t be a positive thing for me. If people can handle that sort of output and input in the social media sphere, power to them”), and panic attacks (“My mom always says that I was born with my nerves outside of my body. But I’m lucky for the anxiety, because it also makes me high-energy”). I’m glad this interview format is starting to get some flack (as Lainey says “is this becoming a trend? A sh-tty trend?”) Think of the best celebrity profiles you’ve read in the last couple of months, whether it was Taffy Brodesser-Akner on Gwyneth Paltrow, David Marchese on Quincy Jones, E Alex Jung on Sandra Oh or Stephen Rodrick on Johnny Depp. There’s a level of distance and probing (be it rooted in admiration or skepticism) that you’re just not going to get from a BFF. As the Fug girls says, “having your friend interview you makes for a flabby and anemic profile at best.”

-In better celeb profiles, this GQ one on John Cho is great.  “You’re the only Asian not in ‘Crazy Rich Asians.’ Did you miss the meeting?”

-Crazy Rich Asians is set to pocket $5.3 million in tonight’s screenings alone. Fingers crossed it makes back its $30M budget in the first 5 days!

-Meanwhile, here’s an explainer on the CRA actors you may not know much about (yet).

-Speaking of new rom coms coming this week that I can’t wait for, Netflix’s To All The Boys I’ve Loved Before is getting great reviews! Vulture says its “witty and sweet” and calls it “summer’s best rom com”, Indiewire says it’s infused with “charm and empathy” and Pajiba calls it “fun and winsome…a total treat and a perfect pick for a night of Netflix and Girls Night in.”

–Priyanka Chopra‘s engagement ring from Nick Jonas (that will never not be a weird thing to type) is on full display in a new Insta snap.

–Taylor Swift spoke at her concert about the anniversary of her sexual assault Trial verdict: “I just wanted to say I’m sorry to anyone who ever wasn’t believed because I don’t know what turn my life would have taken if somebody didn’t believe me when I said something had happened to me.”

-Outside of his court hearing, Liev Schrieber told reporters he did NOT assault a photographer. “I never touched him, I never touched his body with my body. I was pissed, but that was it. I have nothing else to say.”

–Dane Cook hosted a  Q and A on Instagram and opened up about his relationship with Kelsi Taylor, a 19-year-old singer who is 26 years younger than him. Have some bleach handy so you can scrub your brain clean after reading about it.

–Chris Pratt is still talking about James Gunn being fired: “We all love James …but we also really love playing the Guardians of the Galaxy”. You know what’s nuts? Gunn seemed to instantly realize his mistake and was like “yup, i screwed up and I’m outtie.” It’s the stars of GoG that won’t let it go.

-In a new interview, Glenn Close commented on Scarlett Johansson‘s trans casting controversy: “People who are producing and directing properties like that need to go out of their way to get trans actors jobs. But they also should have the opportunity to cast the best person.”

-Wondering when your fave TV show returns this fall? I got ya.

-I don’t think anyone was really excited for Colin Jost and Michael Che to host the Emmys, but their latest interview really cemented it. Good job, guys!

-In a wide-ranging interview, Jim Carrey revealed he doesn’t have access to his own Twitter account and has at least three people (“just pals”) sign off on every post: “When you’re in my position, it’s a really smart thing to have a buffer.” This system needs to be adopted by every celebrity, STAT!

-This illustrated ode to The Americans’ wigs is fire.

-A week after splitting from Cheryl Cole, Liam Payne was photographed looking cozy with a model.

–Bella Thorne‘s first foray into makeup is not going very smoothly. She’s shilling ridiculously expensive, tiny eyeshadow palettes that may or may not rip off a black-owned beauty brand.

-I think I enjoy reading about HBO’s Sharp Objects more than I enjoy actually watching it. This article on its editing is great, as is this weekly updated piece on all the hidden words in the show.

–Viola Davis plots a heist in the latest trailer for Steve McQueen’s Widows.

–Mary Elizabeth Winstead plays a stand-up with a complicated past in the All About Nina trailer.