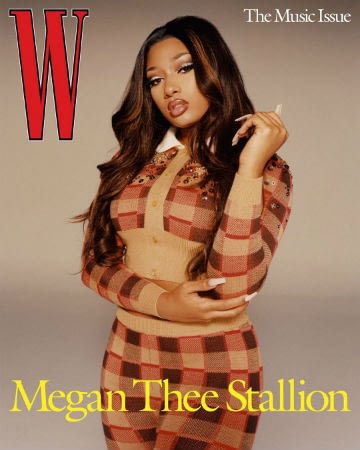 –Megan Thee Stallion is on the cover of W Magazine’s Music issue. She talks about racism (“You know, anything can go viral, so I really like how we’re able to catch these people doing these disgusting things and put ’em on blast, and people are getting fired from their jobs. It’s like, Yeah, we see you. You like to be disgusting in private, so let us show you how to keep that same energy in public. I like that we get to call everybody out now”), and cyberbulling (“It’s really mind-blowing to see the nasty things that people say to you. I don’t know if people think you not gon’ see it. I feel like just being an artist, waking up every day, voicing your own opinions is a risk… Just talking. Being real is a risk”).

–Cardi B has no interest in Tiger King star Carol Baskin‘s criticism of “WAP”, saying “I’m not gonna engage with Carole Baskin on that. Like, that’s just ridiculous you know? Oh, Lord. Like, girl you killed your goddamn husband.”

–Taika Waititi wished Chris Hemsworth a happy birthday — by tweeting a photo of his brother.

–Miley Cyrus appeared on the Call Her Daddy podcast and opened up about her sex life. She says the first time she “went all the way with a dude” it was with Liam Hemsworth when she was 16, but he didn’t know. “I lied and said he wasn’t the first so I didn’t seem like a loser.”

-She also confirmed that she and Cody Simpson have split.

–Dolly Parton continues to be a gem. She’s funding covid research, vocal about BLM, supporting childhood literacy and now in her Billboard cover story, she talks about removing the word “Dixie” from Dollywood. “As soon as you realize that [something] is a problem, you should fix it. Don’t be a dumbass. That’s where my heart is. I would never dream of hurting anybody on purpose.” She also says “Do we think our little white asses are the only ones that matter?”

–Brad Pitt’s lawyers slammed Angelina Jolie for requesting to disqualify the judge in their upcoming child custody trial, saying she’s delaying the case and “depriving” the kids of a “final resolution.”

–Edgar Wright was adamant that Scott Pilgrim shoot in Toronto. “Proud to have shot Toronto for Toronto after decades of the city subbing in for NYC in tons of comic book movies. Couldn’t have been a more perfect setting for my first North American film. Love it & miss it.”

-A commenter told Kelly Clarkson that her marriage failed because she’s too busy, and she was not having it.

-I absolutely agree with this take on why gritty reboots are not what TV viewers need right now. I made it through Perry Mason because the cast was so stacked, but what a slog.

-Speaking of wild social media posts, Nick Jonas took us on a journey.

–This video on how to make a blockbuster movie trailer is perfection.

–In British Vogue, Jodie Turner-Smith talks about how her labour lasted four(!) days, and why she decided to give birth at home. “We had already decided on a home birth, because of concerns about negative birth outcomes for Black women in America — according to the Centers for Disease Control and Prevention, the risk of pregnancy-related deaths is more than three times greater for Black women than for white women, pointing, it seems to me, to systemic racism.”  She also shared a photo husband Joshua Jackson took of her on day 3.

–Kelly Ripa and Mark Consuelos are on the cover of People with their incredible photogenic family.

-I love this photo shoot of Normal People’s Daisy Edgar-Jones for Harper’s Bazaar.

-This supercut of all the times Ellen Degeneres mocked Sofia Vergara’s accent is pretty damning.

–Katy Perry defended the tweet she sent in support of Ellen. “I started that tweet off not undermining anyone else’s experience. I wanted to only speak from my own experience. I have over 100 million people that follow me on Twitter, so not everyone is going to agree with me. And I’m not here to make everyone agree with me.”

–Robert Pattinson could have played Chris Evan’s part in Scott Pilgrim vs the World. I just rewatched that recently and sorry but Evans is perfect in it.

–Ed Sheeran is reportedly going to be a dad.

-This is a great NYT article on how a swimmer was training for the US Paralympic team until all of the public pools closed due to covid — and then David Duchovny reached out to him on Instagram to offer the use of his 25-meter pool in his backyard.

-The fact that I had no idea that Joseph Gordon-Levitt has two sons makes me love him even more.

-The entire original editing team of the documentary series Surviving R. Kelly — the majority of whom are Black, with one Latinx editor — quit the project because their notes were being ignored.

-The Crown has tapped Game of Thrones’ Jonathan Pryce to play Prince Phillip.

–Sarah Cooper is having a moment. She just landed a Netflix special, and did the monologue on Jimmy Kimmel Live.

–Leah Remini is worried that Tom Cruise will try to lure Suri into Scientology when she’s old enough. I mean, first he’d have to talk to her.

-This is a very good, very long interview with Mike Schur on The Good Place and Brooklyn Nine-Nine.

Ima try my best to be humble about this but, @fentyskin is coming July 31st exclusively at https://t.co/f8LNnr3cE8!! Y’all ain’t hear it from me 🤫 but you can shop it early if ya drop me your email: https://t.co/YaT6BFSJec pic.twitter.com/NLUknNxwfd

-Welp. Do you want to take all my money now Rihanna, or wait until the products hit shelves? I’m flexible.

–Megan Thee Stallion says she’s “incredibly grateful to be alive” after suffering multiple gunshot wounds Sunday morning. Wait, what?!?  I thought she was injured by glass.

–Nick Cannon is speaking out against ViacomCBS after the company fired him yesterday for making anti-Semitic comments. He’s demanding an apology and the rights to Wild ‘N Out.

–Diddy and Dwayne Wade are some of the celebs showing Cannon support.

-Interestingly, Kareem Abdul-Jabbar had a piece in The Hollywood Reporter earlier this week calling out anti-Semitic rhetoric by Black entertainers and sports stars.

-It looks like Kanye West is abandoning his (fake) presidential bid.

–Elizabeth Chambers officially filed for divorce from Armie Hammer, citing “irreconcilable differences.” Meanwhile, he trended today because of some shady looking screenshots of DMs that I don’t actually believe are real.

-A bunch of celebrities and politicians’ twitter feeds have been hacked to promote a bitcoin scam.

-Maroon 5 co-founder Mickey Madden has taken a leave of absence from the band following an alleged domestic violence arrest.

-2020 continues to be the weirdest: Ghislaine Maxwell is reportedly being moved from ‘cell to cell’ in prison to avoid assassins.

-Here are all the celebrities in Jeffrey Epstein and Ghislaine Maxwell’s inner circle that are probably really nervous right now.

-You know what’s weird? When the Parks and Rec reunion episode was happening there was so much build up and buzz, but I have barely heard a peep about tomorrow’s 30 Rock episode. NBC isn’t doing screeners for critics, and a bunch of affiliates are refusing to air it — they see it as an ad for their streaming competitor Peacock and NBCU cable networks like Syfy and USA.

-Meanwhile, this is an interesting look back at 30 Rock’s product placement and how they pretended to be above it.

–Dakota Johnson once mused about bisexuality in a 2017 interview and Twitter has jumped on it today as if it’s a new quote for some reason. Time is a flat circle.

-I can’t imagine why Hayden Christensen would agree to revisit the Anakin Skywalker role after all the hate he got from Star Wars fans, but I guess mortgages don’t pay themselves.

–Gracie Cox, a former Hollywood costume designer, is speaking out about an alleged 2005 sexual assault by Entourage’s Kevin Connolly during the wrap party for his directorial debut, The Gardener of Eden. The film’s lead costume designer recalls Cox telling her of the incident right after it happened, and says she immediately confronted him, which witnesses confirmed to the Daily Beast. Four of Cox’s friends also confirmed she told them about the incident in the following days. He’s denied it, saying the encounter was consensual.