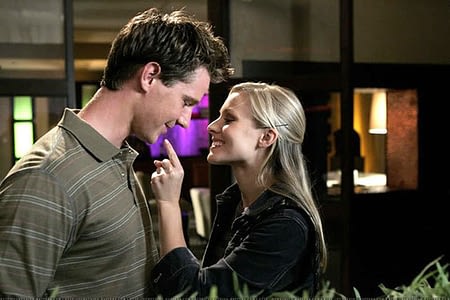 -Huzzah! An 8-episode Veronica Mars revival is in the works at Hulu!

-This Tessa Thompson profile is great. (Remember when she was on Veronica Mars and she wasn’t so great? Weird times…)

-To be a fly on this wall: Meghan Markle and Prince Harry reportedly hung out with George and Amal Clooney in Lake Como.

–Chris Pine, what are you wearing and how do you possible make that work like you do?!?

-Page Six is firmly in Brad Pitt‘s camp. After today’s hearing, I’m wondering if his visitation will still be supervised only? Why is no one really talking about that?

-I only watched The Fosters for one season, but To All the Boys I’ve Loved Before star Noah Centineo is returning for the spin-off and I’m in because PETER KAVINSKY!

-Speaking of Peter Kavinsky, Netflix changed their Twitter bio to reflect our collective obsession. Meanwhile, I liked this piece on the enduring rom com trope of fake boyfriendship.

–Jennifer Garner got a star on the Walk of Fame, and her former costars Steve Carell, Judy Greer, and Bryan Cranston were on hand. (I saw Garner and Cranston’s movie Wakefield a couple of years ago at TIFF but I don’t think it ever was released. From what I can recall, that was for the best.)

-Netflix renewed Glow for a third season (it feels like the second season just ended but this is still good news. Now if they’d only drop the ill-advised relationship bit they’ve been hinting at…)

-NBC has renewed its summer Amy Poehler/Nick Offerman series Making It for Season 2. I’ve only watched one episode so far but it’s like a small screen endorphin release.

–Drake cancelled his first of three shows in TO to visit a little girl in the hospital in Chicago. That video tho. Gah, the ovaries just took a direct hit!

-In a NYT op-ed, Star Wars’ Kelly Marie Tran opened up about the ‘self-hate’ she dealt with after her online harassment.

-Madonna’s Aretha Franklin tribute at the VMAs is all about Madonna — and people were not happy. She later explained her speech on Instagram: “And just to clarify: I was asked to present video of the year by MTV! And then they asked me to share any anecdotes I had in my career connected to Aretha Franklin! I shared a part of my journey and thanked Aretha for inspiring me along the way. I did not intend to do a tribute to her! That would be impossible in 2 minutes with all the noise and tinsel of an award show. I could never do her justice in this context or environment.”

-MTV has green lighted a new season of The Hills — but none of the originals you liked will appear.

-The first season of American Vandal was about who drew the dicks? The new season’s central mystery will be about uncovering the identity of the Turd Burglar. (I love this exchange in the trailer: “What if the motive is just that poop is funny?” “Poop IS funny.”)

-Danny Boyle — the only reason to get excited about the new James Bond film — has dropped out of directing.

-Critical reception to HBO’s Sharper Objects has been mixed, but last week’s episode really turned me off. Not every female journalist in pop culture needs to sleep with their source. It’s such a lazy, dump trope.

-Harvey Weinstein is now being sued by a woman alleging he raped her at the 2006 Cannes Film Festival. The suit claims he “bragged that he had recently received a negative result from an HIV test. Then, over her continued protests, he removed the condom he had been wearing and continued to rape her.”

–Asia Argento denied a report that she sexually assaulted a 17-year-old and says the settlement was Anthony Bourdain‘s idea to make the allegations go away. Man, I really wish she’d left Bourdain out of all this.

-In Hold the Dark, (which debuts at TIFF before screening on Netflix) Jeffrey Wright plays a wolf expert who tracks down the wolves who killed a young boy. Riley Keough and Alexander Skarsgard play the boy’s parents.