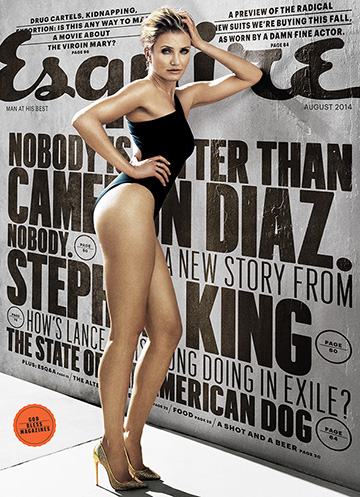 –Cameron Diaz looks amazing on the cover of Esquire, where she once again defends her decision to not have kids while at the same time admitting that she has it “easier” than women who do. Someone give this girl a gold star for flawless PR!

-Also pounding the woman power drum is Megan Fox, who tells Cosmo “women don’t have to be desperate and try so hard.”  That might sound more convincing if she didn’t get famous for crap like this.

-I feel like this story about Ryan Gosling trying to kick Rachel McAdams off the set of The Notebook isn’t new. Wasn’t there always rumours of it being a tumultuous set, or is my brain just trying to retroactively justify why they’re not together anymore?

-Brace yourself for a new wave of bad poetry: Jewel and her rodeo star husband Ty Murray have split.

-Despite recent reports, Shia LaBeouf has not checked himself into rehab. Instead, he’s in voluntary out-patient counseling for alcohol addiction. At least it’s something.

-Meanwhile, Robin Williams is actually in rehab…but it’s just for a tune up.

-Here’s the first trailer for the new season of The Killing. I vowed I wouldn’t watch it again…and then I heard Holder‘s voice. Dammit!

–Katherine Heigl says that her career sputtered because being an actress “betrayed” her after she hit the rom-com genre “a little too hard.”  Yes, I’m sure it had nothing at all to do with her reputation of being impossible to work with and ungrateful.

-Speaking of actresses who are slinking back to the small screen, Jennifer Love Hewitt is joining CBS’ Criminal Minds.

–Beyoncé changed the lyrics to her song during a performance last weekend, and now everyone assumes that she’s hinting Jay Z cheated on her with Mya.

–Kit Harrington doesn’t usually do it for me, but these Jimmy Choo ads might just be changing my mind.

-Just when you thought Robin Thicke couldn’t get more embarrassing, he surprises you. At least he replaced the topless women with cute kids for his new video.

-I’m glad Begin Again is getting such great reviews.

–Tina Fey might be remaking Hocus Pocus? I love all of those words!!

-These are the first images of Suki Waterhouse that I’ve ever seen that don’t make me go “SHE’S a famous model? Really?!” So either she looks really good, or I’m going soft. I’m guessing it’s not the latter.

-It’s good news/bad news for Victoria Beckham. She covers the August issue of British Vogue, but that means her dream of being on US Vogue this year has been dashed.

–Kelsey Grammer has taken it upon himself to copy-edit the internet. Still less annoying than a new season of Boss…

-Everyone’s talking about these photos of Christian Bale as Moses, but I’m much more intrigued by Aaron Paul as Joshua.

-Speaking of new trailers, Jennifer Aniston wants Jason Bateman to do horrible things to her in the Horrible Bosses 2 trailer.