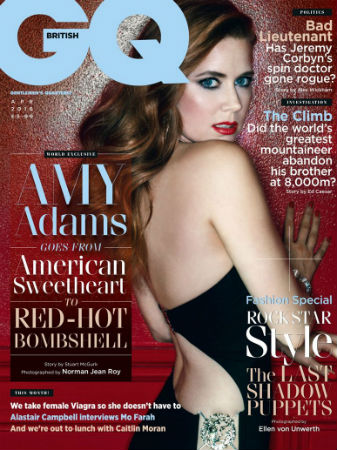 -You know how there were all those rumours about David O. Russell making life hell for Amy Adams and Christian Bale on the set of American Hustle? Adams just confirmed it in British GQ: “I was really just devastated on set. I mean, not every day, but most. Jennifer [Lawrence] doesn’t take any of it on. She’s Teflon. And I am not Teflon.”

–Leonardo DiCaprio‘s group has renamed themselves the Wolf Pack. Let us all bow our heads in a moment of silence for P*ssy Posse.

-I’m surprised it took this long for someone to ask celebs to do dramatic readings of Kanye West tweets.

-This is a fascinating look at why some people ended up wearing certain dresses at the Oscars. It ‘s almost shocking how little input celebrities like Reese Witherspoon have on what they’ll be wearing.

-Meanwhile, here’s a gallery of celebrities who changed dresses between the Oscars and the after parties, and every single one (with the possible exception of Olivia Munn) looks better at the party than they did on the red carpet.

–T.I. captured the epitome of sexism in one single quote about Hillary Clinton. Well done, asshat.

-Netflix has officially renewed Fuller House for Season 2, which means its secret ratings must have been good. It also means we’ve failed as a civilization.

–Jennifer Lopez would like to point out that she wasn’t the only one crying over Kelly Clarkson‘s Idol performance. “Keith Urban was falling apart next to me!”

-Ohhh…could Minnie Driver be the one behind the Guardian’s ‘secret actress’ column? I like that theory so much!

-On the flip side, here’s what Hamiton has wrought: Zack Snyder says he wants to make a George Washington in the style of 300.

–Britney Spears looks great on the cover of V magazine.

–Tina Fey pays tribute to her father in the closing credits to Whisky Tango Foxtrot (which I’m totally seeing this weekend — reviews be damned).

-This is good: YouTube has partnered with Geena Davis and the U.N. to empower female creators.

-Also good: the #OscarsSoWhite talk might have actually spurred some change.

-It’s not all good news. The long-awaited Nina trailer was released today, and no one is happy with Zoe Saldana playing Nina Simone. This is a really good explainer about why people are so upset, while this is a list of actresses who would have made more sense.

–Ian McShane has been cast as Mr. Wednesday in the TV adaptation of American Gods, which is pretty damn perfect.

-Captain America: Civil War is getting really positive early reviews – with one critic calling it an “emotional horror movie.”

-Well, this is random: Star Wars’ Daisy Ridley has recorded a song with Barbra Streisand.

-Celebrities should really, really resist the urge to dox people.

-Does the new Finding Dory trailer leave anyone else a little meh? Or has my heart finally reached full atrophy?