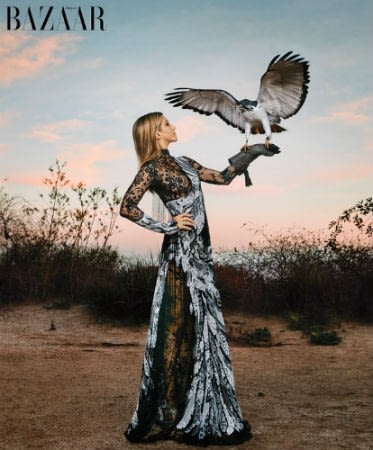 –Jennifer Aniston says she “bows her head in slight shame” over some of her movie choices. We do too, Jen.

-In her New York Times profile, Gwen Stefani is the trolliest of trolls, calling her split from Gavin Rossdale “a really good, juicy story.” She adds: “If I could, I would just tell you everything, and you would just be in shock.” Gurl, you need to spill or get off the PR pot.

–Blake Lively wore a bathrobe to the White House. But it was a fancy bathrobe, so there’s that.

-Everyone is giving Henry Cavill shit for this interview for saying, “I’m not just doing this for the art. The money’s fantastic.” That’s some refreshing honest soundbiting. It’s not like dude’s doing Shakespeare.

–Gwyneth Paltrow shared her tips for wellness on the road, including this totally down-to-earth gem: “When I fly, I try to find a sauna to sit in for 20 minutes to help me sweat out all the germs from the plane.”

–Jessica Alba’s Honest Company is in trouble again, this time for allegedly not being honest about the chemicals in her laundry detergent.

–Diane Kruger gave an interview in which she implied that she recently moved in with Joshua Jackson, her boyfriend of 10 years. There’s also some talk about marriage. BUT THEN she posted on Instagram  “Unfortunately, the interview is completely misleading on some issues.” I give up.

-The Guardian’s secret actress column lost me with her latest assertion that Netflix has ushered in gender equality. Yeah, no.

-The CW just granted early renewals to ALL of it’s shows, including the little-watched Crazy Ex-Girlfriend (yay!) and Reign (I literally had no idea that was still on). Basically, they just became the first broadcast network to look at traditional ratings and be like:

-Speaking of The CW, there is some kind of fan event happening right now with the cast of The 100, and all of the stars are badmouthing the showrunner, which the fans are live-tweeting. Hilarious.

–Jason Katims, who did Friday Night Lights and Parenthood, is casting his new show. But why oh why is it on CBS?

–Stephen Colbert is getting a lot of action this week. First he kissed Helen Mirren, then he serenaded Anna Kendrick.

-Well, this is terrifying. Rebel Wilson thinks she was drugged at a “trendy” unnamed club.

–Tom Hanks is looking for answers in the trailer for A Hologram for the King.