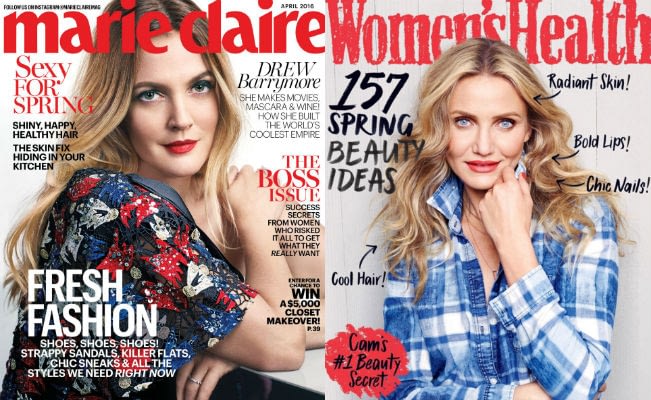 -BFFs Drew Barrymore and Cameron Diaz are both covering magazines this month, and Drew on Marie Claire totally wins. I mean, I’m confused why her reflection doesn’t seem to have the same shade of lipstick as her face in the interior shot, but the cover is lovely. Cameron on Women’s Health, however, is freaking me the eff out.

-Also, Drew revealed that her nickname for Cameron is “Poo Poo.” Mmm-kay.

-I love Jennifer Garner‘s explanation of how torturous it is to wear an Oscar dress. Jimmy Fallon‘s increasing discomfort when she starts talking about what happens when you need to pee and you have to beg your friend to dig your spanx out of your vagina is priceless.

–Lin-Manuel Miranda taught Emma Watson how to beat-box while he freestyled about feminism, and it was all kinds of adorabs.

–Emma and Lin-Manuel also sorted the founders from Hamilton into Hogwarts houses.

-Congrats to Stephen Amell on being named CinemaCon’s Male Star of Tomorrow. I have no idea what that is but I support anyone who wants to shower his beautiful mug with awards.

–Shia LaBeouf and Mia Goth woman are reportedly engaged. Pray for her.

-Even Michelle Pfeiffer is getting in on the lifestlye brand action. I usually scoff at these ventures, but if she’s selling whatever it is that keeps her face looking like that, I’ll take 20 cases!

-My friend wrote about the 22 times Samantha Bee was Canada’s greatest gift to America. Seconded!

–Joanna Newsom says when she first met husband Andy Samberg, she called him a c*nt. It was love at first sight.

-This is pretty inside baseball for the TV industry, but it’s huge: ABC just scored stacking rights to any new Warner Bros. series launched on ABC over next 2 seasons. That means ABC can stream all episodes of a season on their site, app or Hulu, not just the last five episodes. On the downside, it makes those shows less desirable to Netflix.

-Another great read for TV lovers: 6 top casting directors discuss how they choose actors — and the ones that got away. (I love that Allison Brie and Leighton Meester have their pick of pilots.)

-Funny or Die’s The People vs Kanye West is a good time.

–Melissa McCarthy continues to give us the sads about her lack of participation in the Gilmore Girls reboot. “I didn’t actually get asked to do it. But I think they thought I was busy, and then by the time it did come up, then I actually was.”

-I’m giving a hard pass to the new Tarzan trailer. Gawd, that “like a damsel?” line.

-I tend to like the X-Men movies, but the latest trailer for  X-Men: Apocalypse is a bit meh.