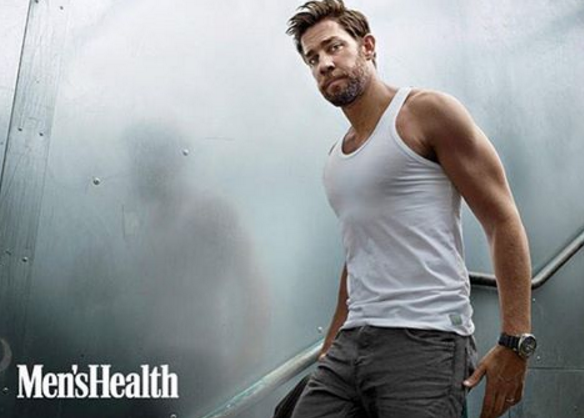 -Congrats to John Krasinski and Emily Blunt, who are expecting their second genetically perfect child. I’m using this as an excuse to post that photo of him in Men’s Health because why not?!

-Perhaps that’s why John felt the need to clarify that he and Jenna Fischer weren’t “genuinely in love” on The Office.

-I’m not even sure if I can get angry at Kristen Stewart for her “gender equality is boring” comments, because they’re so scattered. I could barely follow the thread.

-I love how The X Files’s second episode falling nearly 50% in the ratings still qualifies it as a hit. At least last night’s felt like it got its groove back.

-Jane the Virgin’s  is dating Ben Schwartz. This is some inside-my-head dream relationship casting!

–B.o.B. just started a rap war with Neil DeGrasse Tyson over his flat Earth tweets and I’ve never been happier to be alive.

-I missed this yesterday, but Shonda Rhimes’ speech about why doesn’t think it’s “trailblazing” to make diverse TV is pretty boss.

-Welp. Enjoy this short season of Agent Carter; it’ll prob be our last.

-I guess I always kind of assumed Mariah Carey‘s dogs had a better life than I do, but it’s still depressing to see it in writing.

-Can we all just collectively agree to NOT watch Woody Allen‘s new Amazon show with Miley Cyrus? Like, for humanity?

–Chris Brown won’t be charged for that alleged Las Vegas assault. Of course not.

-Is Britney Spears teasing a new album, or is she just showing off? Either is acceptable, frankly.

–Cersei Lannister reading insults from The Bachelor will make you long for a crossover ep.

-Every time I see a new Pride and Prejudice and Zombies trailer, I get SO EXCITED. The book made me belly laugh.

A Second Season of Big Little Lies Might Happen After All

Selma Blair Is a Survivor