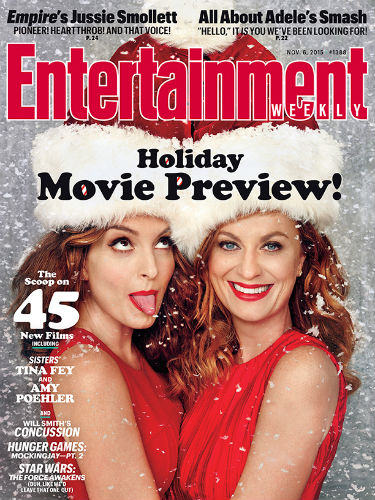 -Christmas just came early! Tina Fey and Amy Poehler are gracing the latest cover of EW for their holiday movie preview. Says Poehler in the interview: “We are each other’s chosen sister. Like most sisters, we’ve never dated the same guy and we’re great in photo shoots and fittings because we know what will look good on one another.”

–Andrew Garfield and Emma Stone didn’t just break up, they broke up “a couple of months ago.” You know what that means? The Summer of Splits is still haunting us!!

-In other split news, Halle Berry and Olivier Martinez have filed their divorce papers, but they’re already fighting over spousal support. Not surprisingly, his “profoundly frightening” “explosive temper” is being blamed for the breakup.

-Here’s an interesting look at how the Walking Dead writers have turned what happened on the latest episode into a no-win scenario for the show. Whatever the outcome, there’s going to be oodles of hate-tweeting on Sunday.

–Khloe Kardashian explained that her putting the breaks on her divorce from Lamar Odom doesn’t necessarily mean they’re reconciling. “For medical decisions and a ton of other things, it’s just smarter that it’s put on hold.”

-I haven’t actually listened to the Hamilton cast recording yet because I’m pretty sure it’s going to take over my life immediately, but this story about Jonathan Groff fangirling over Beyonce when she complimented his stage walk is adorable.

–Hayley Williams joined forces with CHVRCHES onstage, and it was wonderful.

-What the hell, Raven-Symoné? Are you on a mission to be the most disliked Cosby Show alum?

-I cringed A LOT when watching this video of Madonna dancing up on Katy Perry.

-Wait, so Taylor Swift and Calvin Harris are still together? I can’t keep up.

–Zac Efron and Robert De Niro‘s Dirty Grandpa trailer has arrived. Did anyone else get flashbacks of Efron’s recent troubles when he yelled “I just smoked crack!!” (Also, this movie looks like a bag of garbage.)

-Katniss & co. gear up for battle in the latest Mocking Jay: Part 2 trailer.

Rachel McAdams Dares to Bare on the Cover of Allure