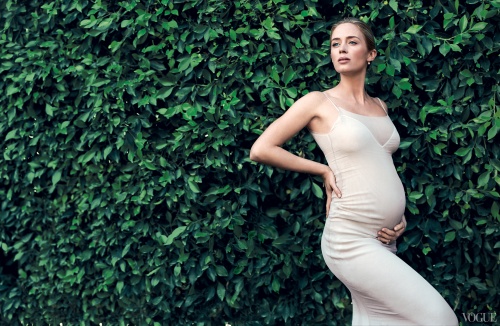 –Emily Blunt looks amazing in Vogue, which she posed for during her pregnancy.

-Please please please tell me that reports of Tom Cruise grooming Elizabeth Moss to be his Scientology girlfriend are false. STAY AWAY FROM PEGGY!

-Watching James Franco solemnly “apologize” for hitting on a teenager on this morning’s Live with Kelly and Michael sent my cringe muscle into overdrive, especially since the theory that it was all part of a movie promo stunt was inexplicably picking up steam. “I guess I’m just a model of how social media is tricky…I used bad judgement and I learned my lesson.”

–Mariah Carey is fronting like she doesn’t know who Kim Kardashian is, which is kind of adorable.

-You must watch this old video of Jon Hamm at the age of 25, sporting some intensely 90s hair and talking about foot massages on a dating game show.

–Johnny Depp insists that his wedding to Amber Heard will not be of the “shotgun” variety.

-Speaking of Johnny, pretty much everyone on the Internet has fallen out of love with him because of all this near couch-jumping bullshit. Sad face.

-A new trailer for Orphan Black has arrived, and Tatiana Maslany talks about the new clone in this interview. I’m glad this show is getting so much coverage before its season premiere.

-Just when I thought the How I Met Your Mother finale couldn’t have been any worse comes news that they had the nerve to cut a Robin Sparkles performance. Grrr!

-Meanwhile, everyone’s talking about how short Jennifer Lopez‘s dress is, but I can’t stop looking at her shoes. What’s happening there?

–Gwendoline Christie, who plays Brienne on Game of Thrones, just landed a part in The Hunger Games: Mockingjay–Part 2. Hollywood should give her all the roles.

-The curtain is closing on Glee sooner than expected. The show’s 5th season will be cut short due to crappy ratings.

-Jersey Shore’s Snooki is pregnant with her second child.

-Rumour has it that Stephen Colbert is the frontrunner to replace Letterman on Late Night. Watch Letterman‘s official announcement here.

-Syfy has ordered a new drama based on 12 Monkeys, which is probably a terrible idea.

–Ellen made Emma Stone and Andrew Garfield squirm (adorably, of course) when she questioned them about their relationship. Guys, I had no idea Andrew Garfield had a British accent.

–Rose Byrne looks lovely on the new cover of Elle, where she talks about boyfriend Bobby Cannavale. I always forget that they’re dating, but I like them both so it’s like a recurring happy surprise.

–Scarlett Johansson recorded a cover of that stupid selfie song.

-Nice! Lupita Nyong’o is the new face of Lancome.

-How did I miss the fact that the ladies of Parks and Rec posed for a Jane Austin-inspired photo shoot?!

–Bryan Cranston is writing a memoir and he promises to “reveal the secrets and lies that I lived with for six years shooting Breaking Bad.”

-Check out the first teaser trailer for the new season of True Blood.

–Seth Rogen posted an extremely NSFW selfie on Twitter. Seriously, don’t click on it unless you haven’t eaten in a while.

–Chris Brown was taken into custody by U.S. marshals last night, and will be taken to D.C. for his trial.

-I haven’t read this oral history of Heathers yet. This requires a comfy couch and a glass of wine before really digging into it.

John Boyega Takes the Gloves Off

Johnny Depp and Vanessa Paradis Are Officiallly Over