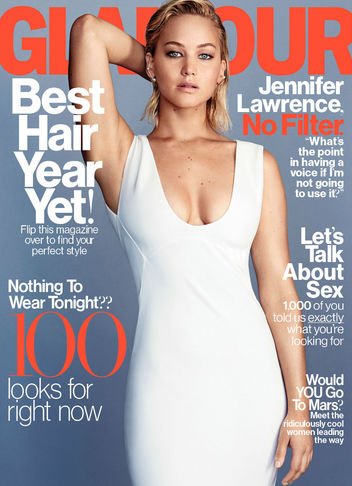 -All of the big quotes from Jennifer Lawrence’s Glamour cover story have been tweeted already (her support of Planned Parenthood, her perfect response to the nude photo theft, her plans to go full Grey Gardens with Amy Schumer, etc.) but it’s worth reading the whole thing anyway.

-Who had “got cornrows” on their Justin Bieber Vacation Bingo Card?

-Of course Michael Bay is telling people he’s worth “half a B.” OF COURSE he is.

–Ryan Coolger is rumoured to direct Marvel’s Black Panther, which is awesome if true, but I’m waiting for confirmation. Variety and Verge jumped the gun by announcing it last week, and both had to walk it back.

-I thought I’d *finally* be able to stop obsessing about Making a Murderer and move on, but then the filmmakers went on the Today Show this morning and revealed that one of the jurors just told them they only voted guilty because they “feared for their personal safety.” Meanwhile, the trial’s prosecutor emailed The Wrap with 9 reasons Avery is guilty. (Personally, I think it’s very likely that he or someone in his family is guilty, but that trial was a travesty.)

–Leonardo DiCaprio has never dated anyone over 25? That is…not surprising.

–Julia Styles is engaged and I love her ring (and I NEVER love the rings).

-The only thing good about Mel Gibson presenting an award at the Golden Globes this Sunday is that Ricky Gervais is hosting.

–Mandy Moore instagramed pretty much every moment of her holidays in Maine with Dawes singer Taylor  Goldsmith, and it would be annoying if it wasn’t all so damn adorable.

–Blake Lively and Amber Tamblyn: still in the sisterhood.

–Saoirse Ronan charmed everyone last night at the New York Film Critics Circle awards, while Kristen Stewart accepted her award by saying “I’ve received a lot of MTV popcorns. This is a little different.”

-The stars of Bridget Jones’s Baby shot three different endings, so even Renee Zellweger doesn’t know who her character ends up  — or who is the father of Bridget’s baby. (If it’s not Mark Darcy, Imma gonna flip some tables…)

-It was super clever for Deadpool to air this new promo during The Bachelor.