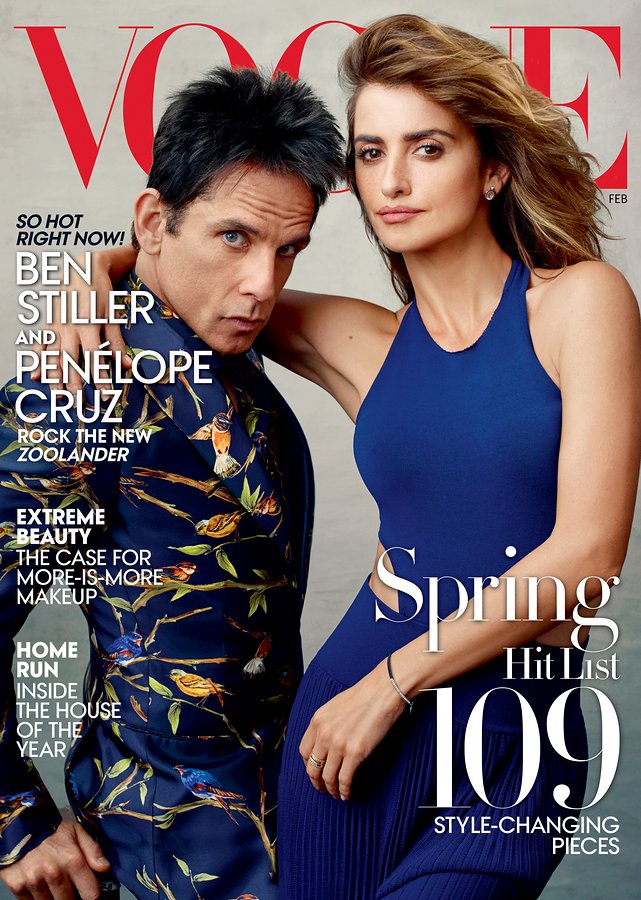 –Derek Zoolander gives his best Blue Steel the cover of February Vogue. Is this real life?

-Meanwhile, the new trailer for Zoolander 2 is basically a perfume commercial.

-Hold up, Anne Hathaway. I’m all for supporting other women and sisterhood, but just because Jennifer Lawrence is a woman, doesn’t give her free reign to be a dick. Come on, now.

-“I want to see the license that says that they’re a journalist” – Sean Penn, who clearly doesn’t know how journalism works.

–John Krasinski explained why you don’t ever want to sit at Leonardo DiCaprio’s table during an award show.

–Emma Watson tweeted a feminist quote from Alan Rickman in tribute and the internet hated her for it because people suck.

-The SNL writers of the alien abduction sketch knew that Ryan Gosling was going to lose his shit during it, but they didn’t mind. “We were charmed. When Gosling smiles, the world smiles with him.” Truer words…

–Amal Clooney is still super smart, in case you were wondering.

–Wolf Parade is back and I’m so happy!

–Céline Dion‘s terrible week just got worse. Her brother Daniel is very ill and is not expected to survive much longer.

–Gillian Anderson and James Corden prove that the X Files theme can make anything scary.

-Trying to stem an early wave of bad reviews, Fox has now made three episodes of The X Files reboot available to critics and the trajectory seems to be: terrible, slightly better, awesome. The third one is written by Darin Morgan and the general consensus is that it’s light-hearted and wonderful. Whew!

-Less promising are the reviews for DC’s Legends of Tomorrow.

-Crazy Ex Girlfriend’s Rachel Bloom used to intern for Seth Meyers, and busted him for it when appearing on his show this week.

-These pictures of Megan Mullally and Nick Offerman doing puzzles together restore my faith in humanity.

–Kate Middleton is now an online newspaper editor. It took me a journalism degree and years of work experience to get that position, but ok.

–Nick Carter claims he’s ‘just a guy trying to enjoy some vacation time’ following his arrest. Um, doesn’t a vacation imply having a job to take a break from?

–JJ Abrams just dropped an excellent trailer for his Cloverfield sequel which comes out in two months — despite the fact that no one even knew this movie existed before this morning!