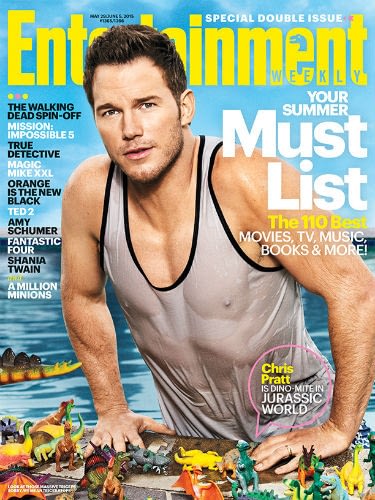 -Remember last year’s Summer Must List issue of EW, which featured Jessica Alba climbing out of a pool? This year we get Chris Pratt. #upgrade

–Pratt also covers the new issue of GQ, in which he talks about getting in trouble at NBC for always showing his junk.

–Lewis also posted a photo with Game of Thrones’ star Emilia Clarke, who he’s costarring with in the adaptation of Jojo Moyes’s novel Me Before You, which I *hated*. But now I might have to reconsider this movie…

-The weirdest thing about the Mad Men finale is that there was debate afterwards about whether or not Don created the Coke ad. Matthew Weiner has definitively answered that.

–Vin Diesel keeps posting karaoke tributes to Paul Walker and they are getting increasingly weird. The latest is Tove Lo’s “Habits” (which I love) but hearing him try to inject emotion into the “I pick up daddies at the playground” line is unintentionally hilarious.

-Did you watch David Letterman‘s final show last night? It was very low key, which was perfectly him. Here’s video of his signoff and the Foo Fighters’ performance.

–Bill Murray had a very, very good time after showing up on Letterman’s last show.

-I don’t even watch Supernatural (except for the occasional time that my sister-in-law tells me Felicia Day will be on it), but the fact that the entire cast joined in on this parody recap video set to “Shake It Off” is awesome.

-The Supergirl trailer has garnered more than 10 million views in just a week. Don’t screw this up, CBS!

–Rebel Wilson is 35, not 29 like she’s been claiming in interviews. How did she even expect to get away with that? Who does she think she is, Catherine Zeta Jones?

-Speaking of ageism in Hollywood, Maggie Gyllenhaal revealed that she lost out on a role because at 37, she was deemed “too old” to play the love interest of a 55-year-old man.

-Now we know why Mindy Kaling has been talking so much about her relationship with BJ Novak lately: they’re writing a book about it.

-Meanwhile, I spent the first half of this Cannes video of Kaling with her Inside Out costars thinking Amy Poehler was Megan Mullally. True story.

-Uh oh. There are more rumours of Johnny Depp abandoning filming of the latest Pirates movie.

–Batkid is going to give you feelings again with this new trailer. No, YOU’RE crying!

Kevin Spacey Tries to Deflect, The Internet’s Not Having It

Jessica Chastain Gets Artsy for Vogue

Chrissy Teigen Can Fix Your Life