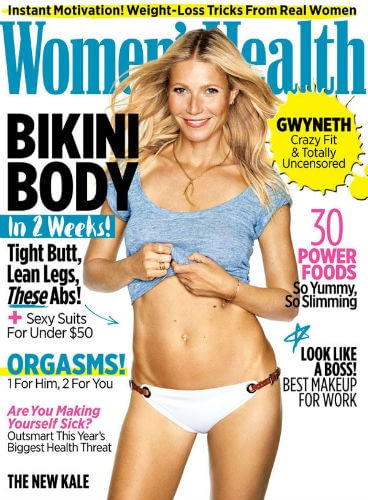 -In her new Women’s Health cover story, Gwyneth Paltrow insists she’s a cool, down-to-earth chick who isn’t as high maintenance as we’ve been led to believe. On her beauty routine, she laughs, “I’m not like, ‘Then I use this masque that I make on my stove.'” On parenting, she insists, “I don’t believe in saying, ‘You’re not allowed that.’ If my kids want a Shirley Temple with the radioactive cherry in it, go for it, you know?” Ahh, why’d she have to say “radioactive.” She sounded *thisclose* to being normal!

-I never thought I’d agree with an article titled “It’s Time for Katherine Heigl to Return to Grey’s Anatomy,” but this makes a lot of sense.

-Ugh, these behind-the-scenes details about the inappropriate behaviour of Mad Men actor Paul Johansson during a Buzzfeed interview are super cringey. Dude needs to simmer down and remember he’ll always be known as the guy who’s heart was eaten by a dog.

-Whew! Supernatural’s Jared Padalecki seems to be fine after sending a series of distressing tweets.

-On today’s Ellen, Melissa McCarthy further expanded on her verbal bitchslap of a reporter who criticized her looks.

–Emily Blunt adds her voice to high heel outcry at the Cannes Film Festival. Thank gawd that rule didn’t exist when I was there.

-Now that it’s been confirmed that Julianna Margulies and Archie Panjabi didn’t shoot their final scene together, whenever you tell someone you hate your coworker, you now need to clarify if you “Good Wife hate” your coworker.

-And that was the day I decided to follow Grant Gustin…

-The comments in this story about celebrities being dicks to their fans are beyond hilarious.

-I love the Mariah Carey/JLo feud so hard!

-Just in case you didn’t already love Amal, George Clooney says she kept him on one knee for “28 minutes” pleading his case when he proposed.

–John Greene wants to remind everyone that he’s a novelist, not a casting director. So leave him alone about the Looking For Alaska actors, mmm-kay?

–Simon Pegg addressed his comments about the “dumbing down” of blockbusters and our current obsession with “very childish things” like “comic books, superheroes” — though I’m not sure it’s better to admit that he just makes stuff up when he’s bored during interviews.

–Blair Waldorf and Seth Cohen are having a baby!

-Variety has a great cover story on Greg Berlanti. He has a hand in pretty much every show I watch religiously — though I’m not sure about his new Pan movie, based on this trailer.

Lea Michele Opens Up About Finding Love After Cory Monteith