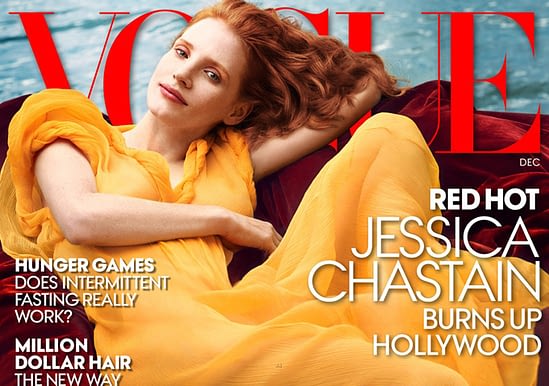 –Jessica Chastain shot a cute short video as part of her Vogue cover shoot (much like Kate Winslet’s).  I also really liked this gallery on the eight famous works of art that inspired Jessica’s looks.

-I guess they’re not lying when they say a new baby strains a marriage. Malin Ackerman split from her husband just seven months after giving birth.

–Kristen Bell was very cute on The Tonight Show this week, talking about her quiet wedding. “We picked up sandwiches and called it our ‘wedding brunch.'”

–Miley Cyrus is rapping about twerking in the new will.i.am video because being defined by a spastic dance move is a great career move, I guess?

-Also, Miley would like you to know that she’s NOT sleeping in her backyard teepee after getting burgled, ok?

-Glee’s Dianna Agron (and her moustache?) star in the new video from The Killers.

–Kanye West doesn’t appear very often on Kim Kardashian‘s reality show, but not because of any valid career reasons. “I don’t really do her show just because I don’t particularly like the way the producers shoot some of the shots. I’m very meticulous to that, right? I like to get a different DP [director of photography] or whatever.”

-In the same interview, the radio hosts kept calling Kanye out for his contradictory antics, and it was amazing.

-Another day, another photo of Idris Elba looking HAWT on the red carpet.

-I tweeted this yesterday but it’s awesome enough to link to: NPR’s Linda Holmes wrote a piece on how Peeta plays the role of the typical movie girlfriend in Catching Fire.

-This story is crazy: the producer of Pretty Woman says he was Israeli spy.

-This is weird casting news but I kind of love it: The OC’s Seth Cohen will play Zooey Deschanel’s ex-boyfriend on New Girl.

–Nigella Lawson‘s husband’s latest defense in that choking incident: “she was off her head on coke.” Sure thing, guy.

-This Hollywood Reporter feature reveals how the standard “no animals were harmed in the making of this film” disclaimer is often bullshit. The stories from the Life of Pi shoot are especially disturbing.

–Vince Gilligan says he hopes Jesse got away to Alaska at the end of Breaking Bad, but he’s pretty sure he ended up in prison. Sad face.

-12 Years a Slave and Nebraska lead the Independent Spirit nominations. I’m shocked that the ladies of Blue Is The Warmest Color were ignored, but at least Michael B. Jordan got some love.

–Alec Baldwin and MSNBC just released a joint statement, confirming the cancellation of his show.

-“Brian’s big announcement” that floated around the internet earlier today was a hoax, but that doesn’t actually rule out The Family Guy character may return.

–This headline is whaaaaa??? “Tori Spelling hospitalised for stress and anxiety after negative feedback to her slamming Katie Holmes as a plastic robot”

-In this new X-Men: Days of Future Past promo , Magneto is linked to the assassination of JFK.

-A new trailer for The Secret Life of Walter Mitty has landed. I’m warming up to this one.

Jessica Alba Not So Honest?

The One Where Friends Reunited