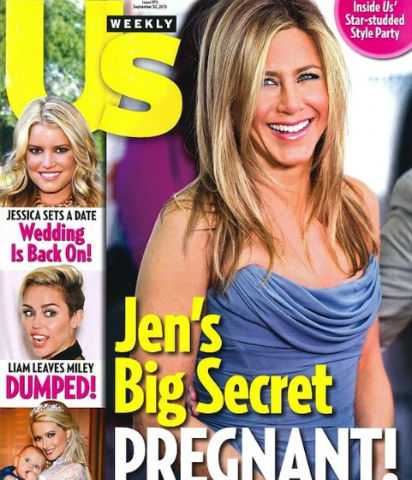 -We’ve heard many, many, many reports about Jennifer Aniston being pregnant, but never from Us Weekly. It’s not like they’re People or anything, but they’re not exactly InTouch either. In any case, her camp has already issued a denial. Plus, if she were trying to hide a belly bump, this stomach-accentuating dress is not the way to do it.

–James Franco instragrammed a photo of him kissing another dude, which turned out to be his brother. Yawn.

-More details are emerging about Zac Efron‘s rehab. Apparently he was addicted to coke and molly.  It’s weird; I usually assume pretty much everyone in Hollywood is on coke, but this one surprised me.

-Giving a new spin to the term “soccer mom,” Beyonce played with some kids in Rio.

–Kaley Cuoco’s sister Briana (who I love from LBD) may be featured on the new season of The Voice.

-If my Twitter feed was filled with nothing but Ian McKellen and Patrick Stewart’s buddy photos, I’d be a happy gal.

–Jimmy Fallon and Justin Timberlake joined together for yet another sketch last night.  Someone needs to warn these two about the law of diminishing returns.

-A VIP table wasn’t available when George Clooney went out to dinner in Vancouver the other night, so he sat at the bar with the rest of the plebs and was totally awesome about it.

-Also, the photo of him winking on the set of Tomorrowland is making my life.

-Even George R.R. Martin knows that Game of Thrones better win an Emmy on Sunday ’cause it has no shot in hell of beating Breaking Bad next year.

–Gwyneth Paltrow is joking about her pubic hair again. Yay?

-A bodyguard who died during an altercation with the police earlier this month was recently fired by Beyonce and Jay Z after they reportedly discovered that he’d hired a prostitute while on duty.

-Universal has hired bodyguards to protect Charlie Hunnam since the Fifty Shades of Grey casting news broke. But isn’t his character supposed to like it a little rough?

–Taye Diggs is going to guest-star on New Girl, which makes me stupidly, incandescently happy.

–Blake Lively showed up at the Gucci show during Milan Fashion Week today, where she cozied up to Anna Wintour.

Guys, I love Penn Badgley and I don’t care how embarrassing that is. I mean, this is just adorable!

-Speaking of FunnyorDie, it looks like Dean Norris is shooting something with them.

-Emmys’ producer Ken Ehrlich is defending the show’s In Memoriam choices. I’m sorry, but to honour Cory Monteith and leave out Larry Hagman is bananas.

-Is it weird that I don’t hate Jared Leto‘s cover of Rihanna’s “Stay”?

-This is a very good (but long) read about why Breaking Bad viewers are still trying to sympathize with Walter White.  As someone who keeps getting into arguments with people who claim that Jesse is just as bad as Walt, I cosign this.

-Meanwhile, Breaking Bad’s Aaron Paul went to the happiest place on earth — which he probably really needed after that last ep.

-The extended Thor trailer has landed. I’m much more interested in this movie now that I know Joss Whedon rewrote parts of the script. Also, is that Idris Elba I see in one blink-and-you’d-miss-it scene? I’m in!

Is Ben Affleck Being Pushed Out as Batman?

Chris Pratt and Chris Evans: Happily Ever After?