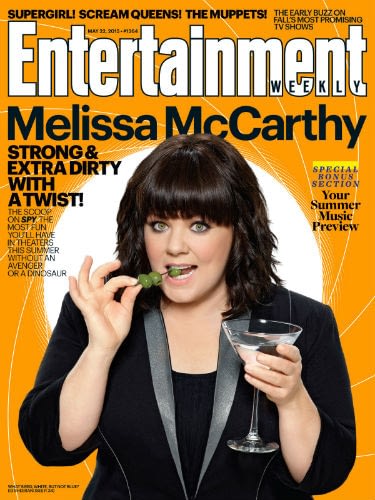 –Melissa McCarthy is giving me serious bang envy on the cover of EW. Also, in a new clip from her film Spy, she protects (and lusts after) Jude Law.

–Anna Kendrick spoofs Indiana Jones in a new charity video. Seriously Hollywood, I would watch a full movie of this…

–Rachel McAdams is fierce in the new True Detective season 2 trailer. Sigh. Fine, Nic Pizzolatto. I’ll watch it. You wore me down.

-The SuperGirl trailer actually looks fun (and Calista Flockhart seems to be having a ball), though I have lots of doubts that it can survive on CBS.

-Here are all of The CW’s new show trailers, including one for the Arrow/Flash spinoff, Legends of Tomorrow. It actually looks pretty damn good. I’m surprised they showed this much footage, since they haven’t even shot a full pilot yet.

-Crap, this new Julie Plece show looks good, too. What are you doing to me, The CW?!

-Although I guess I should stop feeling guilty about the fact that pretty much the only shows I watch regularly are on that network. In the fall, 3 out of 5 nights on The CW will be entirely exec produced by women, and they have two shows with non-white leads.

-Sadness: Johnny Depp‘s two dogs may be put down because he didn’t follow Australia’s quarantine rules.

–Anne Hathaway hires Robert De Niro in the first trailer for The Intern.